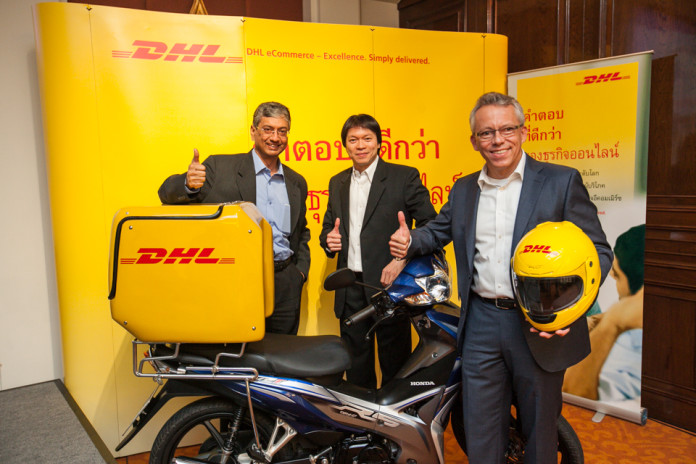 DHL eCommerce, a division of the Deutsche Post DHL Group, has expanded its operations into Thailand and is offering end-to-end domestic delivery service for Thai e-commerce merchants.

The German integrator is looking to reap the rewards on offer of the country’s burgeoning e-commerce market which is expected to triple to 3.6 billion euros by 2020.

Major additions will be made to DHL’s delivery infrastructure in the country, including a 3,000 square metres central distribution center in Bangkok and a network of over 20 depots located throughout Thailand ensuring full coverage across the entire country.

To meet increasing business demands, DHL plans to more than double the number of depots in Thailand by 2017 and expand its fleet primarily in two-wheel vehicles that can operate more efficiently in the traffic situations in Thailand’s major cities.

As part of its service offerings, DHL eCommerce’s fleet of two and four-wheel vehicles will provide next-day delivery to all urban areas, and a two to three day delivery to all other locations. All merchants have access to cash on delivery (COD) with daily remittance and access to a multilingual call center.

“The Thai e-commerce market is expected to more than triple in size to EUR 3.6 billion between now and 2020[1] and with this investment, we are well positioned to support the growth of e-commerce businesses in Thailand.”

DHL eCommerce chief executive officer for Asia Pacific, Malcolm Monteiro says the firm sees the major strategic opportunities for e-commerce growth in Thailand, particularly with the Asean economic community which is expected to increase the movement of goods within the region.

“Despite e-commerce already being a billion-dollar sector with extremely rapid adoption, Thailand’s e-commerce share of the retail market is still relatively low compared to other high-growth economies. Only 1.7 per cent of total sales in Thailand are obtained from e-commerce, compared to more than 10 per cent in China,” adds Monteiro.

“Thailand is ranked as one of our top priority markets in Southeast Asia : its expected annual market growth of more than 20 per cent (from 2014 to 2020) is likely to be largely driven by significant numbers of SMEs beginning to extend their business models into online marketplaces.”