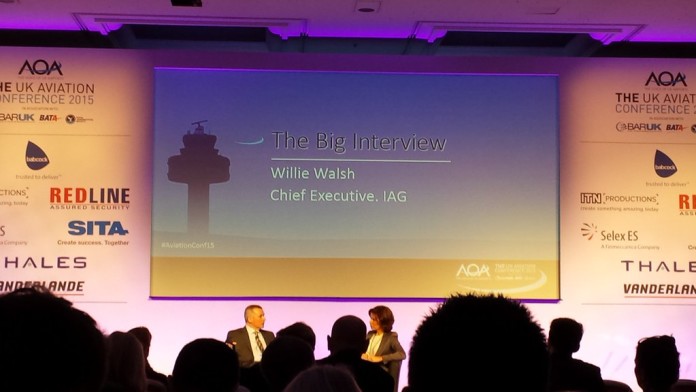 Speaking at the Airport Operators Association’s (AOA) UK Aviation Conference at the Hilton Metropole in London yesterday, he says the group, which bought Aer Lingus in August for 1.4 billion euros, is in the market again.

“We would like to collect a few more (airlines) and there is ambition in IAG and we have been heartened from the success of the acquisitions of BMI, Vueling and Aer Lingus.

“If the right opportunity presents itself we are open and ready, but we are not actively pursuing it at the moment. We are being actively contacted by governments and airlines keen for us to take on these challenges,” Walsh adds.

“Consolidation has benefitted the industry and Europe is very fragmented and Europe is where we need further consolidation. It is part of the solution (to increase airline profitability),” he explains.

As for where Walsh thinks a new runway should be built in the South East of the UK, he says plans for a third runway at Heathrow Airport are too expensive. “We have concerns about the costs of Heathrow. I do not think it is relative and the cost is outrageous and I cannot see it justified and we are not prepared to pay to support it.”

Walsh feels the political belief is not there for another runway at Heathrow as the UK government does not have “brave politicians”.

As for cargo, he says freighters will struggle to get slots if either airports are expanded. IAG Cargo has stopped using freighters and Walsh says it has no intention of changing this strategy.

“Going forward our focus is on bellyhold and it is a more efficient way to move cargo. We are not going to be interested in dedicated all-cargo aircraft as we do not think it is sustainable as the available due to the available space that exists in bellyhold on passenger aircraft.” Walsh adds.

He also welcomes Open Skies agreements and says “more the merrier“ and is pro-competition as it is a positive boost to business in the marketplace.

The action of US carriers Delta Air Lines, American Airlines and United Airlines attempting to reduce the three big Gulf airlines flying into the US at will, he feels is “embarrassing for the industry“ and labelled them “pathetic“.

Walsh adds they are all anti-competition and the carriers only want to restrict competition for their own benefit.