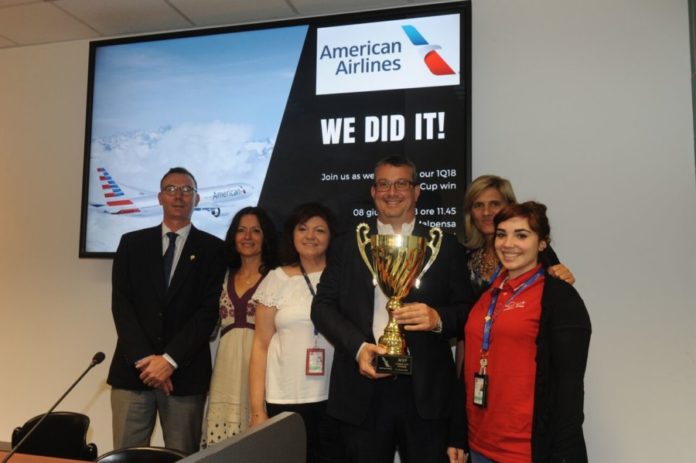 American Airlines cargo and passenger teams in the Italian city of Milan have won the company’s Customer Cup for Q1 2018. Earlier this month the airline celebrated a decade of connecting New York and Milan and in August this year its cargo operations will expand into a new 5,000 sq metre facility at Malpensa Airport.

In a ceremony at the airport, teams from both sides of the airline’s business were rewarded for meeting and exceeding targets set. For the passenger team, departure reliability, turn dependability, baggage performance, customer feedback and overall customer experience marked them out from other international stations in American’s global network.

On the cargo side of the business onboard, hand posting and specialist product performance helped to deliver the victory.

“Winning the Customer Cup is no small feat. It’s a testament to your continued dedication to our customers, to running a great airline and doing a stellar job of representing American in Milan,” says Muise.

Adds Hartmann: “The fact that both our cargo and passenger teams have won these awards at the same time is a tremendous showcase for how the two sides of our business can work hand in hand and come out on top while delivering great service to all our customers.”

American Airlines Cargo will be the launch customer for the new WFS cargo facility at Malpensa and will move all its on airport operations there by August 1 2018.