AirBridgeCargo (ABC) Airlines has seen a year-on-year tonnage growth of 18 per cent in the first nine months of 2015 to 344,130 tonnes, and has also been expanding its network throughout the year.

In September alone, the airline saw a 28 per cent rise to 42,480 tonnes. ABC says its freight tonne kilometres increased by 35 per cent in September.

He explains to ACW: “[The] Russian market is import-oriented and we have seen some decline in imports, which is associated with the decreasing value of the rouble decreasing purchasing power in the country.”

Van de Weg continues: “During the first nine months of 2015 imports from Europe fell by 37 per cent, the main drop was related to flower imports, while imports from the US dropped by 11 per cent. Imports from Asia were down 15 per cent.”

As for the rest of the year, van de Weg notes: “Overall we do not expect [to see] the cargo market booming or falling, since the issue with the rouble and oil price volatility will still be in place. However, we are always ready for quick moves if there are increases in demand and if the market will be above our expectations.”

As for route expansion, van de Weg points out that ABC does not have any plans for Russia, as it already covers Moscow, Yekaterinburg, Novosibirsk, Khabarovsk and Krasnoyarsk.

ABC is planning more destinations outside of Russia, having launched Helsinki, Hanoi (Vietnam), Los Angeles (US) and Singapore this year, which he says have all seen stable volumes to Russia.

He observes: “Even though the main driver of the expansion to these destinations is to accommodate traffic in and out of Asia; as a side-effect we will also be able to cater for existing Russian import volumes.”

The twice-weekly Boeing 747 Helsinki service started on 26 January from Moscow’s Sheremetyevo International Airport and returns to the Russian capital via Frankfurt (Germany).

When announcing the service in January, van de Weg said: “This new service from and to Helsinki will allow us to support the import and export flows which require direct Helsinki service. Furthermore we will also offer trucking services to the Baltic region and Scandinavia.”

The carrier started twice-weekly flights to Hanoi on 1 April from Sheremetyevo via Hong Kong International Airport. Van de Weg said at the time: “AirBridgeCargo believes that entering the Vietnamese market comes as a logical next step in developing the strategically important Asian market.”

ABC also launched twice-weekly services to Singapore on 3 September. At the time Changi Airport Group assistant vice president for cargo and logistics development, James Fong commented: “The new service by AirBridgeCargo marks a significant milestone for Changi Airport, as it opens up new cargo opportunities between Singapore and Russia.” 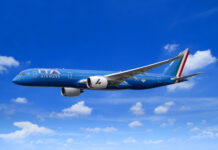