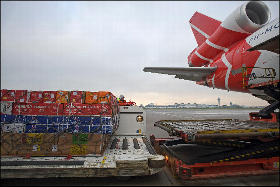 Airfreight markets across Europe maintained a steady rather than spectacular growth in the first six months of 2014, according to data from Airport Councils International (ACI) Europe.

Figures released on 6 August by ACI Europe point to a stabilised recovery in cargo markets with Europe, as a whole, posting an average growth rate of 4.6 per cent. The key European airfreight hubs of Amsterdam Airport Schiphol, Frankfurt  Airport and Paris Charles de Gaulle Airport continue to have growth with increases of 8.8 per cent, 2.6 per cent and 3.8 per cent, respectively.

ACI Europe director general, Olivier Jankovec, says: “These first half year results not only reflecting much improved economic conditions across Europe, but also show demand for air transport bucking macro-economic indicators. This is good news for our industry.”

Frankfurt, Europe’s biggest freight hub, returned a modest 2.6 per cent growth in the first half of the year. Its six monthly average was affected by a downturn of 4.1 per cent in June.

One of the top performers so far in 2014 is Sabiha Gökçen International Airport which delivered a 19.6 per cent increase, albeit it on a significantly lower total turnover than some of the major freight hubs.

Other key European city airports leading the way this year include, Milano Malpensa Airport up 12.3 per cent, Brussels Airportwith 9.4 per cent, Luxembourg Airport at 9 per cent and Adolfo Suárez Madrid–Barajas Airport achieving 6.5 per cent. Airfields that were not so fortunate were, Liège Airport which returned a small growth of 1.5 per cent, and Moscow Domodedovo Airport,Rome Fiumicino Airport and Ben Gurion International Airport saw downturns.

Jankovec warned there were, “significant uncertainties,” for the second half of 2014, not just for the European economy, but also at a global level. “Geopolitical risks in Europe and nearby are probably at their highest in years,” he added. “All this requires a great deal of caution and keeping the same kind of traffic performance will definitely not be a given.”