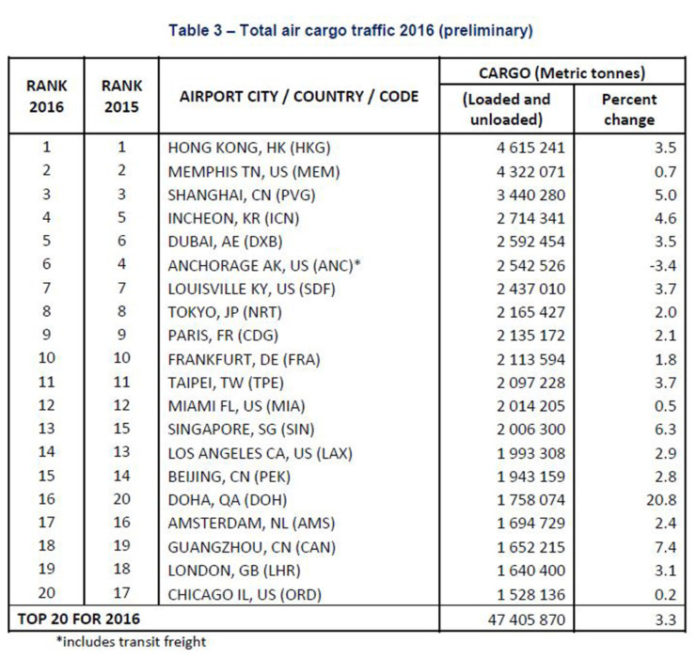 The world’s top 20 cargo airports grew 3.3 per cent in 2016 as air cargo markets experienced a revival in the second half of 2016, Airports Council International (ACI) revealed in its 2016 world airport traffic rankings.

The top 20 handled 47.4 million tonnes between them, representing 44 per cent of global volumes between them. Total cargo volumes including mail were up 3.3 per cent and international freight grew by 4.3 per cent.

Hong Kong International Airport retained its position as the busiest cargo airport in the world, with volumes growing by 3.5 per cent to 4.6 million tonnes.

ACI says: “Air cargo markets experienced a revival in the second half of 2016. Despite the looming uncertainty regarding trade policies in the face of protectionist sentiments, heightened business confidence through inventory build-ups and increased export orders remained apparent for the short-term.”

Hamad International Airport in Doha was the fastest growing airport with 20.8 per cent growth to 1.7 million tonnes, moving it from 20th busiest in 2015 to 16th. The only other airport to see growth anywhere near this level was Guangzhou Baiyun International Airport in China’s Guangdong province, expanding 7.4 per cent to 1.6 million tonnes, enough for it to overtake London Heathrow Airport as the 18th busiest cargo airport in the world.