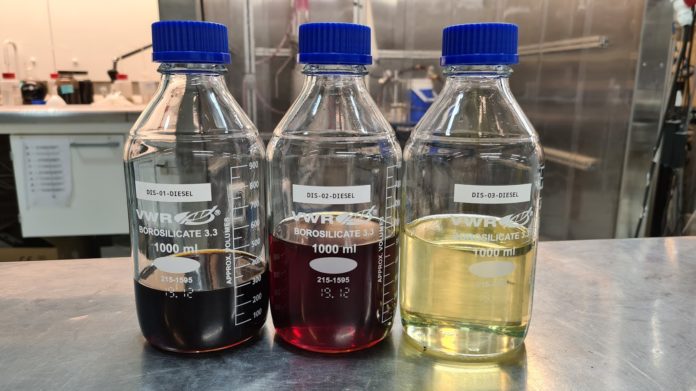 ”It has been a real milestone in HyFlexFuel to demonstrate biocrude production from such a variety of feedstocks in the hundreds of kg’s scale,” says Patrick Biller, who leads the pilot-scale HTL research at Aarhus University.

“Thanks to the expertise of several project partners, HyFlexFuel proved that HTL biocrudes can be successfully upgraded to drop-in fuels in an industrially-relevant environment, achieving hundreds of hours of continuous operations,” adds Daniele Castello of Aalborg University. Analyses of the kerosene fractions of the upgraded biocrude show promising compositions for a use as aviation fuel.

“The production of HTL fuels from three different feedstock classes shows the flexibility of the process,” says project co-ordinator Valentin Batteiger of Bauhaus Luftfahrt, Germany, “Meeting jet fuel specifications is an appropriate target to validate that high-performance transportation fuels can indeed be produced from a broad range of residue and waste streams via hydrothermal liquefaction.”

The decarbonisation of the transportation sector will require large volumes of renewable fuels. So far, renewable diesel and jet fuels are mainly derived from plant oils, but the EU Renewable Energy Directive limits the use of biofuel from food and feed crops since they do not meet sustainability requirements when produced at large scale. For the future, it will be important to commercialize advanced biofuel conversion technologies, which utilise a broader and more sustainable feedstock base.