Spain was one of the fastest growing European air cargo country markets in 2016 as many gateways had a bumper year with most of the top airports posting strong growth numbers.

This was due to a range of reasons including an improving Spanish economy boosting both imports and exports, increasing bellyhold and freighter capacity through new routes being run and a focus on infrastructure.

Spain’s airport operator AENA explains that 2016 was a massive success air cargo wise and Spanish airports saw combined air cargo growth of 11.2 per cent, as the entire airport system handled 795,575 tonnes, which was its highest ever total tonnage in a calendar year.

And 2017 it is forecasting a similar strong performance and feels it will only continue to grow its freight levels, while last year’s increase it explains was “aligned to the most optimistic forecasts” that it made.

In 2016, air cargo growth was recorded by the country’s four main airports of Adolfo Suárez Madrid-Barajas Airport (pictured above), Barcelona-El Prat Airport, Zaragoza Airport (pictured below) and Vitoria Airport, which saw a nine per cent, 13.3 per cent, 29 per cent and 12.4 per cent uplift, respectively.

The likes of UPS, FedEx and DHL have also ramped up their operations and continue to see strong growth at locations in Spain.

AENA notes that looking at the direct flows to and from its gateways in Spain, the main geographical areas in descendant order were, Europe, the Americas and Middle and Far East.

As for the strongest sectors last year, in terms of value in exports garments and pharmaceuticals were the best performing commodities and freight types as both are growing areas in Spain, the home of Zara and where a range of pharma firms are located.

But AENA is certainly not resting on its laurels and it is planning on making air cargo investments at its airports this year and beyond, and increasing tonnage and operations do prove challenging as the right facilities need to be in place to handle the freight to the highest standards. 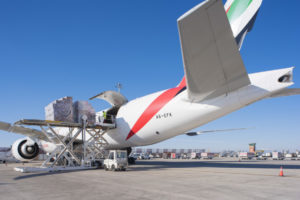 The airport operator explains: “The increases in the cargo operations require consequently the need of new infrastructure for cargo, especially in Madrid where the Cargo Center is more mature.

“Because of this reason AENA has been working on the urbanization of new plots in the first line of the airport with direct access to the apron, some of them are going to be dedicated to cargo handlers and couriers. The plots have a net area for cargo of about 72,000 square metres. The urbanization is now finishing.”

One of the driving forces behind the growth was the wide array of new routes being operated into and out of Spain as new bellyhold and all-cargo services were started from across a wide network, especially into Madrid and Barcelona, the country’s two main hubs.

The region where the most were started to and from was the Far East with new connections to China and Japan mainly, but also to the India.

All these markets are driving cargo volumes as more flights, which only mean more tonnage and Spain is tapping into airfreight’s biggest region Asia Pacific.

This is likely to continue as many carriers see Spain as a perfect route to reach other markets through road feeder services, interline carrier agreements and to also take advantage of perishable commodities, the range of textile manufacturers and pharma opportunities.

Last month, Cathay Pacific Airways launched a new four-times weekly seasonal service between the world’s busiest air cargo hub Hong Kong and Barcelona from 2 July 2017 (subject to government approval). This will mean Cathay will have more non-stop flights from Spain to Asia that any other carrier.

But how does AENA summarise the Spanish air cargo market at present and in 2017?

The operator explains: “We are improving our relative position among our competitors in Western Europe assuming that we are far from the figures of the major hubs, by improving the services and competing in fares to become a relevant actor in the cargo flows between Middle and Far East and the Americas.

The future of Spain’s air cargo market is looking bright and primed for growth.