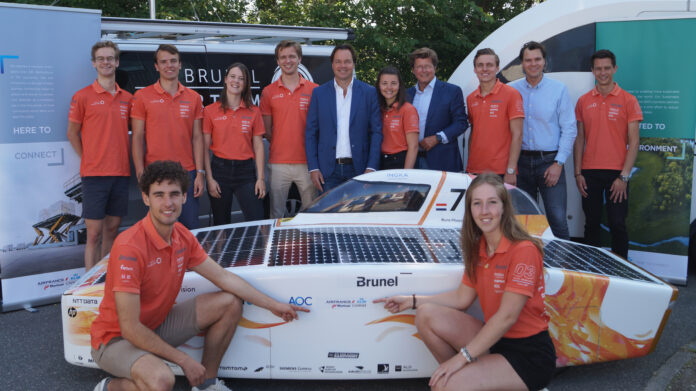 Air France KLM Martinair Cargo (AFKLMP) is partnering with the Dutch Solar Team to compete in the Sasol Solar Challenge in South Africa from 9 to 16 September 2022.

Building on Air France KLM Martinair Cargo’s record of innovating to achieve greater
sustainability in transport, AFKLMP will be the Dutch Solar Team’s logistical partner in
South Africa’s Sasol Solar Challenge by assisting with the air transport and related
processes of the team’s solar vehicle, the Nuna 11s. AFKLMP will also convert the fuel
needed to fly the Nuna 11s from Amsterdam to Johannesburg into sustainable aviation
fuel (SAF), reducing the carbon footprint of its journey.

The oil crisis in 1973 and growing awareness of the damage that fossil fuels cause the
environment have sparked global efforts to produce alternative sources of fuel for
households and transport. In 1983, the Danish inventor Hans Tholstrup built the first
car powered entirely by solar energy. He drove it from north to south Australia, proving
that the impossible was possible. Tholstrup is considered the founder of Australia’s
World Solar Challenge.

In 2001, the Dutch Solar Team, made up of students from Delft University of
Technology, took part in the sixth World Solar Challenge in Australia. Their aim was to
inspire as many people as possible to think about sustainability and innovation. As the
late Dutch astronaut and Solar Team leader Wubbo Ockels once said, “There is only
one earth. And there is no spare”.

Of the 43 teams that took part, the Delft students were the first to cross the finish line
with the Nuna, making them the first ”rookie” team to win this race.

Today, solar racing is intended to inspire and drive technological innovation while
raising awareness of the environmental impact of fossil fuels and how it can be
mitigated. By pushing the different teams to not only use new technologies but also
refine them, solar racing drives progress in sustainable technology that will eventually
lead to more commercial innovations.

In 2019, KLM and Delft University of Technology entered into a partnership agreement
aimed at making aviation more sustainable. The partners carry out joint research into
alternative sustainable fuels and energy-efficient aircraft design, such as the Flying-V.

“Air France KLM Martinair Cargo feels inspired and connected with the drive and
purpose of the Sasol Solar Challenge. The airfreight industry faces the challenge of
reducing our collective carbon footprint. Part of our purpose is to drive innovation
towards this goal by leading initiatives involving all the players in the industry. From an
airline perspective, fleet renewal and the adoption of sustainable aviation fuel are key
policy objectives for the short and medium term, bringing us closer to making the
necessary change,” said GertJan Roelands, SVP sales and distribution Air France KLM
Martinair Cargo.

AFKLMP’s main innovation in reducing its carbon footprint is the Sustainable Aviation
Fuel (SAF) Programme, the first of its kind in the industry. Launched in 2021, the SAF
Programme invites players in the value chain to purchase sustainable aviation fuel for
their flights, thus lowering the total carbon output of their journeys. SAF is produced
using alternative feedstock, such as used cooking oil and straw and wood residues (but
never palm oil). Blended with conventional jet fuel, SAF proactively reduces emissions
by up to 85% compared to fossil fuels.