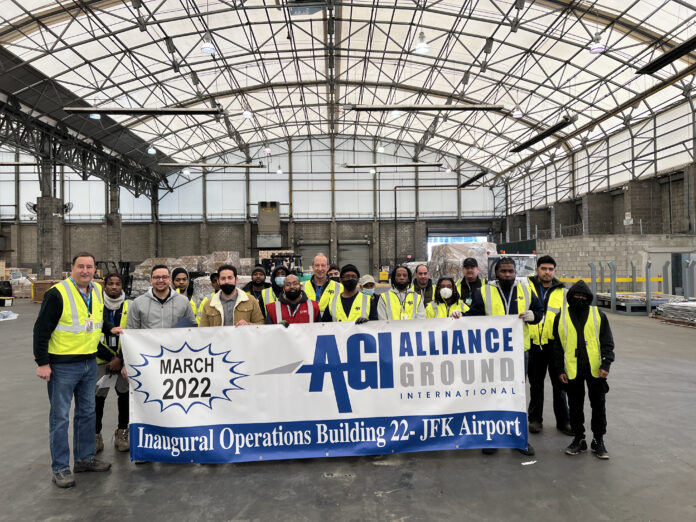 “Back in October, the Port Authority JFK notified us that they were taking back ownership of Building 22 at JFK International Airport,” explains Warren Jones, vice president business development, AGI.

“The building was built in 1997 for United Airlines and has been vacant for seven years, so the Port Authority approached us to ask if we at AGI would be interested in taking over the leasehold of this facility to begin cargo operations.”

Jones says it was a “no-brainer” for AGI and the company immediately said “yes”.

“We really appreciate the Port Authority and their visionary efforts to provide permanent relief for carriers at JFK,” he comments. “As we know, it’s one of the most important markets and there has not been a new facility of this size opening up in a long time.”

AGI is investing $2.5 million in improvements to the facility, including installation of new ramp equipment. The 82,000 sq ft facility (7620 sq m) has also been kitted out with new camera systems, handling systems and IT software.

“We’re committed 100% to the Port Authority and the customers of JFK and we’re very excited to have premium carriers beginning operations with us,” Jones adds.

On March 1, AGI welcomed Cargolux Airlines to the facility and, on March 15, Turkish Airlines touched down at JFK. Jones says the new facility will enable both carriers to increase their operations at the airport.

It will be a 24-hour operation for the 150-strong team in Building 22. Jones adds more that more staff will be involved in the operation but working from home.

All types of cargo can be handled at the facility including pharmaceuticals, general cargo and dangerous goods. “We have the space to cater to the oversized needs of Cargolux and for Turkish Airlines, which has passenger flights, the facility has an extensive racking system in place,” Jones notes.

“We will also be installing our cargo mobility system at the facility. An import cargo agent will have a handheld unit and incoming cargo can be checked into a spot in the cargo racking system. The information is automatically loaded to the system so a freight forwarder can go on our website and see where the cargo is. It adds more transparency for the forwarder.”

Starting up cargo operations in a vast facility that has been vacant for years and needs updating is no mean feat, especially during the current climate of supply chain delays and disruptions.

Jones says the building was in need of some TLC: “We had to spend some money updating the HVAC systems, the offices, the bathrooms, the customer airline offices and the warehouse.”

“As the entire logistics industry has felt, there were some delays. However we were able to pull resources from round the country.”