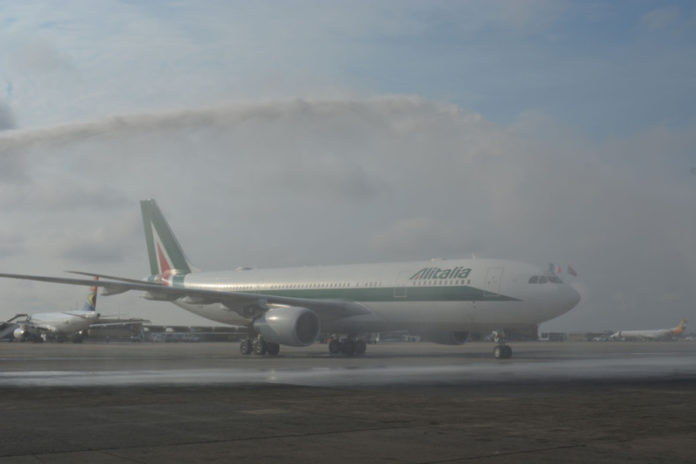 Alitalia has returned to South Africa after a 16-year absence when an Airbus A330 arrived at Johannesburg’s OR Tambo International Airport on 9 April.

The Italian airline will operate four flights a week between Rome and Johannesburg, adding to Alitalia’s network of 94 international destinations with over 4,000 weekly flights and 143 routes.

Alitalia chief commercial officer, Fabio Maria Lazzerini says: “We are delighted to be back in South Africa and especially O. R. Tambo International Airport which remains the busiest airport in Africa and a gateway to the region. This was always an important market for us and we are pleased that the process of restructuring and realignment of Alitalia has now permitted us to return.”

OR Tambo general manager, Bongiwe Pityi says: “The timing of Alitalia’s return to South Africa is apt considering the plans the City of Ekurhuleni has for the development of an aerotropolis through which the Gauteng City Region hopes to attract strategic investments in key economic sectors including aviation, aerospace, advanced manufacturing and logistics.”

Pityi adds: “As partners focused on developing new routes and attracting new entrants to operate in and out of our airport, we take pride in the behind the scenes hard work which culminated in the approval of a signed memorandum of understanding that will govern how we work as partners in the newly formed Gauteng Air Access Committee. Together we believe we can develop significant new air traffic for the region.”