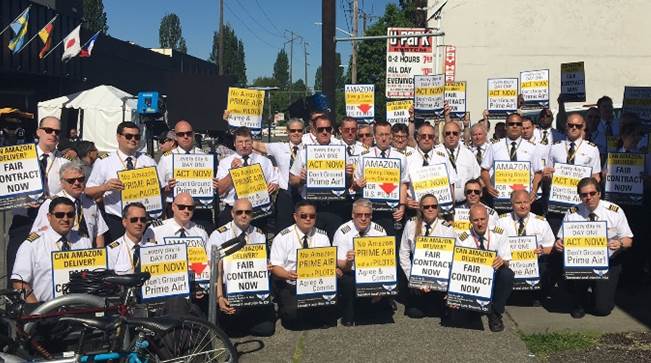 Air cargo pilots who fly for Amazon Prime Air picketed outside the e-commerce heavyweight’s annual shareholder meeting in Seattle on 23 May.

The 65 picketing pilots (pictured above) said they wanted to flag up the intensifying challenges at their airlines and potential risks for Amazon’s growing logistics operations as there is a “looming” pilot shortage, which will disrupt operations and the future success of Prime Air.

Each has committed to wet-lease 20 Boeing 737-300F. Amazon has also secured warrants to purchase substantial equity in AAWW and ATSG. 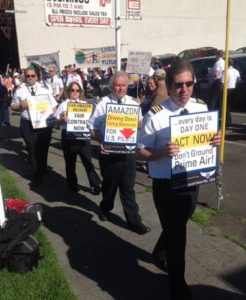 Atlas Air first officer, Marvin Tait who has flown for the company for two years says: “Amazon is at the heart of our carriers’ vision for the future and that’s why it’s our responsibility as pilots to alert shareholders about the underlying issues at our airlines that could spell trouble for our relationship.

“AAWW has made huge commitments to Amazon even though we’re losing dozens of pilots a month and are not able to replace them. We urge Amazon investors and executives to heed the voices of those on the frontlines, and encourage its contracted carriers to help build a successful partnership that works for customers, pilots and our businesses alike.”

Concerns about the future of Prime Air were aired in a letter to the Amazon board of directors from the pilots’ union – the International Brotherhood of Teamsters general secretary treasurer, Ken Hall.

The letter says the “tightening pilot supply and looming operational risks” at Amazon’s cargo contractors should be of concern to board members, explaining: “Amazon is highly dependent on both ATSG’s and Atlas Air’s ability to staff, maintain and operate the aircraft leased to Prime Air…We grow increasingly concerned both companies are experiencing operating difficulties that could jeopardise their ability to adequately fulfill their obligations to Prime Air and Amazon.”

The letter encourages Amazon to work with pilots and the union to solve any issues, emphasising “working collaboratively will decrease any potential disruption of service and lead to improved outcomes for both Amazon and our ATSG and Atlas Air member pilots”.

Earlier this year, Amazon said it will construct a $1.5 billion hub at Cincinnati/Northern Kentucky Airport while it is also rumoured to be planning to purchase a raft of new Boeing 767s to grow its logistics capabilities.