ALL NIPPON AIRWAYS (ANA) and United Airlines Cargo have received anti-trust immunity from Japan’s ministry of land, infrastructure, transport and tourism (MLIT) for a joint venture.

The venture covers network planning, pricing, sales and handling on trans-Pacific routes, which have not been disclosed. ANA says this is the first of its type between Asia and the Americas and it will provide customers with an expanded network and greater capacity. ANA tells Air Cargo Week (ACW) it will start shipments from Japan to the US first and then have a US to Japan service at a later date. The airlines applied to the MLIT for immunity in November 2014.

The Japanese carrier tells ACW it cannot say if there will be any more joint ventures, but adds: “We would like to be positive about further programmes if we could see customer benefit in specific geographic scope and routes.”

This is the second joint cargo venture for All Nippon Airways. ANA and Lufthansa Cargo carried out their first joint shipment on 2 December from Haneda International Airport to Heathrow Airport on a Boeing 777-300. 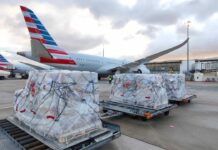