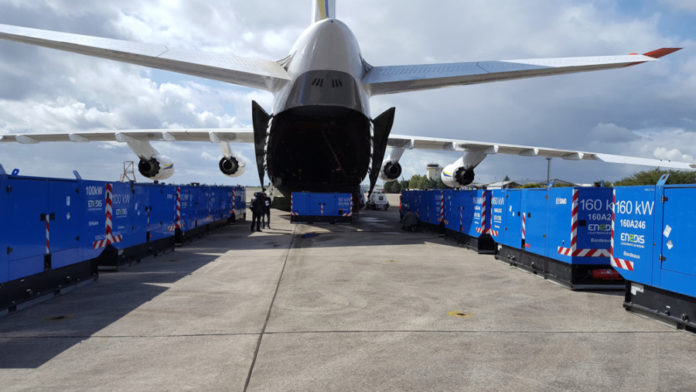 Antonov Airlines has delivered 32 portable generators to hurricane-stricken Guadeloupe for EDF Group using one of its seven AN-124-100s.

The generators, which weighed a total of 105 tonnes, are needed to provide electricity to France’s Overseas Region of Guadeloupe and Overseas Collectivity of Saint Martin, both of which were severely affected by Hurricane Irma.

The 32 generators came in three different sizes between 2.4 and four tonnes, and were moved from Chateauroux in France to Pointe-a-Pitre in Guadeloupe in under 24 hours.

Antonov Airlines director, Paul Furlonger says the aircraft was in Cairns, Australia at the time of the charter, which meant having to respond promptly to move it halfway around the world.

He says: “The AN-124-100s’ unique onboard crane system, which has a lift capacity of 30 tonnes, allowed for a safe loading and unloading process, without the need for a special ground infrastructure at the airport.”

He adds: “This is the first in a series of Antonov Airlines flights that will deliver humanitarian and relief cargo to the Caribbean from the governments of France, the Netherlands, and the United Kingdom.”