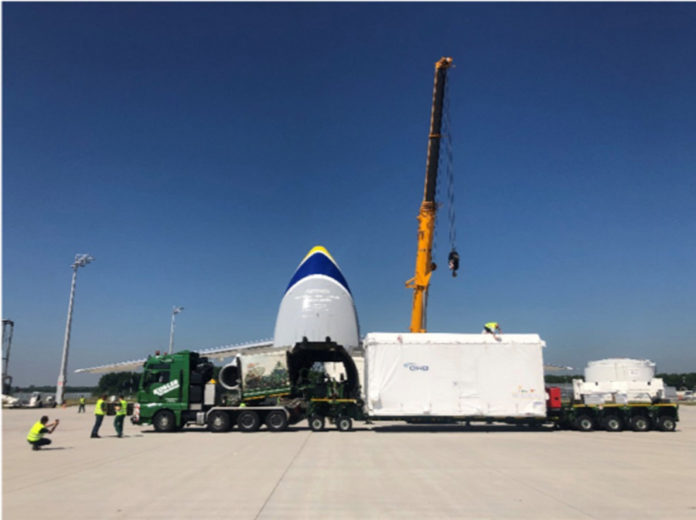 Antonov Airlines has flown a satellite from Germany to French Guiana in time for its launch on 6 August.

Working in partnership with Kübler Spedition, the satellite was flown from Munich Airport to Cayenne Felix Eboue Airport on behalf of OHB System.

An AN-124-100 was used to transport the satellite and related equipment, weighing 70 tonnes in total.

The satellite was placed in its own climate-controlled container, with ground support equipment for preparing the satellite for launch and Antonov’s specialised loading equipment were also transported.

Martin Banns, commercial manager of Antonov Airlines’ UK office says: “Transporting this kind of sensitive aerospace equipment has a range of challenging and specialised requirements, and our engineers worked in partnership with Kübler Spedition and OHB to provide a seamless transition of cargo from the test facilities near Munich, to aircraft, to launch site.”

Data loggers were used to monitor pressure, temperature and humidity in the container, and an Antonov technician downloaded this data on arrival at intermediate and final destination stops to provide Kübler and OHB with real-time data.

The satellite, EDRS-C will receive observation data from low earth orbiting satellites in the European Space Agency’s network and relay it back to ground stations.