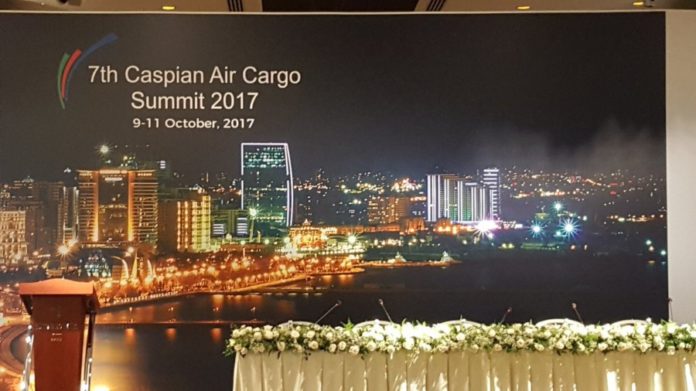 Delegates at the 7th Caspian Air Cargo Summit in Baku, Azerbaijan heard today that the country is aiming to grow its air cargo market and develop into a logistics centre of Central Asia.

Azerbaijan Airlines president, Jahangir Askerov said the aim is to make airports in Azerbaijan into “logistics hubs” and added that a 2020 roadmap is ready and in place while a freighters zone is planned in Baku.

In the first 8 months of 2017, Baku Heydar Aliyev International Airport handled 202,000 tonnes, which was significant growth as in 2016 the gateway handled 170,000 tonnes in the same period.

Cargo growth at Baku was once driven by the O&G market, but is now fuelled by rising volumes of special products like pharmaceuticals, perishables, electronics, mail, high-tech cargo and e-commerce shipments, while charter cargo flights are also up.

Delegates also heard from Silk Way Group senior vice president, Wolfgang Meier who spoke in the session on e-commerce and detailed the home carrier’s ambitious plans to grow its own fleet and network.

He told delegates that the Silk Way Boeing 747 Freighter fleet is currently 12, but by 2019 it will increase to 15, as rising e-commerce demand and growth in special products means more main deck capacity is needed.

The carrier now flies to 39 destinations but will add a further two by the end of this year and in 2019 it will be operating to 50. Meier said Silk Way wants to make its network more “dense and robust” and the objective is to build up Baku into an intercontinental hub.

Meier also said that he views e-commerce as an opportunity rather than a threat, and highlighted how the likes of Amazon and Alibaba are changing the marketplace as they already know what the consumer is thinking and it is all about big data.

He explained: “It is the big data they (Amazon and Alibaba) want to control and they want to manage the last mile as this is where all the data is. This the touch point to the customers.”

Meier also forecasted that 2018 would be more difficult for the air cargo industry than the wave it is riding in 2017 and there will be a better match of supply and demand, with overall market conditions much tougher.

Summit delegates also heard earlier in the day from WorldACD Market Data director, Ken de Witt Hamer who said the Central Asia market which makes up 12 countries including Azerbaijan, has been growing this year faster than the global average.

He said outbound traffic from 2015-17 in Central Asia is up 11 per cent, and inbound traffic is up 14 per cent in the period, compared with worldwide growth for of six per cent.

And in August, outbound Central Asia traffic is up four per cent, and up 18 per cent excluding Russia, while inbound is up 21 per cent with, and without Russia.

He noted like Meier, that the growth is being driven by special cargo products like valuables, pharma, dangerous goods, live animals and high-tech cargo.

In his summary of the Central Asia market, he says the region excluding Russia outperformed worldwide market growth, especially inbound from Europe and Asia Pacific.

And interestingly, he also said the 20 top global freight forwarders only account for 14 per cent of cargo sales from Central Asia, much lower than the global average of 43 per cent – showing there are many strong local forwarders in business.

He also explained that general sales agents (GSAs) also play a more important role in Central Asia than the rest of the world and year-to-date figures to August show 35 per cent of air cargo sales in the region were through GSAs, compared with 23 per cent worldwide. The remainder of sales being sales made directly through airlines.

The Caspian Air Cargo Summit runs until tomorrow and is set to be attended by 250 delegates from more than 30 countries.