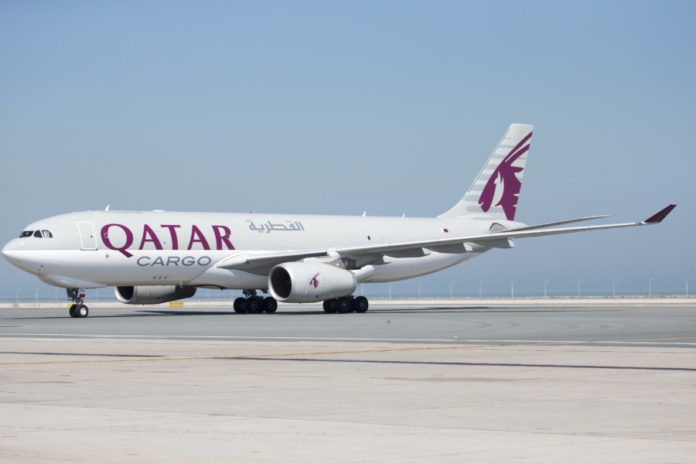 Even Qatar Airways admits the roll it is on, one it believes will continue beyond this year, is “amazing.” This view is based on exponential growth on all fronts, such as network, product, tonnage and fleet, Qatar Airways Cargo chief officer cargo, Guillaume Halleux tells Air Cargo Week.

“Network-wide, our tonnage rose by 19 per cent in 2017 compared to 2016 with Europe being our highest growth region at 23 per cent tonnage increase. There was huge demand for our QR Charter service, with a 41 per cent increase in this financial year over 2016/17,” Halleux says.

Making Qatar more unusual is not the optimism, but their belief there is more of the same to come. Others agree 2017 was cracker but cautiously say that does not mean this year will be. Not so Qatar Airways.

He points out pharma, perishables and e-commerce rely on air cargo and are now major industries.

The e-commerce explosion as he referred has had a profound effect on manufacturers and retailers who are seeking air cargo services to reach their customers, meaning the long term growth is a part of the future.

“The cargo division has been experiencing significant growth each year. Our FTKs in 2018 (YTD February) grew by nearly 22 per cent over 2017 (YTD February). Long-term support from our clients, new emerging markets, booming e-commerce and increase in specialised products such as pharmaceuticals, perishables and live animals are the contributing factors,” says Halleux.

To tap these markets Qatar has a good line up of belly-hold destinations in 2018 with several passenger services to Asia and Eastern Europe being launched.

The Doha-based carrier recently became the first Gulf airline to begin direct passenger services to Luxembourg. “Other exciting destinations include Cardiff in Wales and London Gatwick in England. The new belly-hold flights will increase our overall capacity from the UK by more than 240 tonnes each week,” Halleux says.

“We have invested in multi-billion dollar warehouse and transit facilities at Doha hub to provide 2.4 million tonnes capacity annually, when our second cargo terminal (CT2) project is ready,” says Halleux.

Qatar Airways Cargo has been operating at the Hamad International Airport since December 2013. The facility is equipped to handle 1.4 million tonnes cargo annually so in future it will have more scope to meet demand.

Not that it plans to stop there with product and service enhancement being one of our key focus areas, says Halleux.

“We have heavily invested in technology and innovation, enhancing our products such as QR Mail and QR Express, simplifying business processes, all for the benefit of our clients and will continue to do so in the next five years,” says Halleux.

What makes all this all the more interesting is it comes at a time when Qatar, for complex political reasons, even by Middle Eastern standards, has been blockaded by its neighbours although this “has not slowed our plans,” Halleux points out.

“We were already expanding our network and focusing on product enhancements and continued doing so during the blockade period. The airline transported 19 per cent more cargo in 2017 as compared to 2016, and we expect the trend to continue in 2018. It would be easy to suggest this growth is only due to the blockade, but it is also due to our network development,” he says.

The only point on which Qatar Airways does not have the same bounce is on the issue of competition although even then its comparative. The Middle East and especially the Gulf region in which it sits have several good hubs, all of whom know this and most of whom aspire and work towards this.

Still, Qatar Airways has a good pitch: “Qatar Airways Cargo is perfectly and strategically positioned at the brand new Hamad International Airport with its state-of-the-art facilities. Qatar is an ideal hub-and-spoke gateway,” he says.