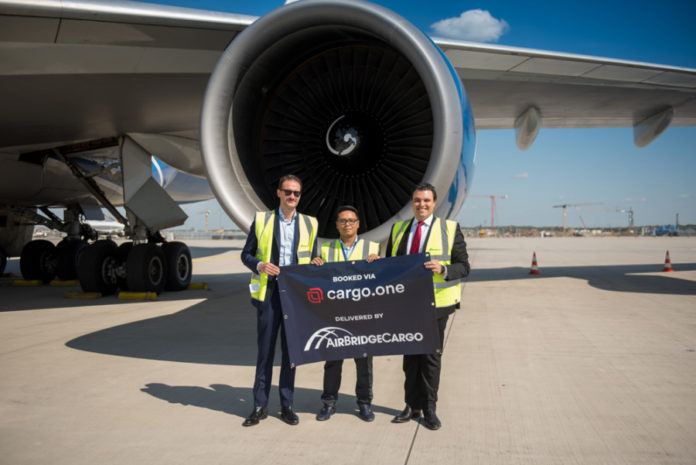 Three months after joining forces, the shipments booked through booking platform cargo.one are taking off on freighters operated by AirBridgeCargo and CargoLogicAir.

Speaking to journalists on Wednesday 11 September at the airline’s office in Frankfurt Airport CargoCity Süd, executives were eager to tell Air Cargo Week about how the partnership is performing so far.

Celetaria says he first became aware of cargo.one last year but did not look into it closely until management started talking about it. The first sit down was at the IATA World Cargo Symposium in Singapore this year and Celetaria was impressed.

Demmer adds: “I felt very refreshed walking out of that meeting because we were not talking about the mythical task of digitalisation but what we could do in the very near future together, and how to get going quickly.”

AirBridgeCargo and strategic partner CargoLogicAir announced the partnership with cargo.one in June 2019 at the air cargo Europe exhibition in Munich, Germany.

Claussen says: “It took us from WCS until Munich to set up the partnership and all the agreements, and the vision of what we wanted to achieve. Then it has taken from Munich until now to implement it.”

Describing this as new and saying air cargo does not have a long history of digital booking services, Demmer says traditional IT providers will talk about five-year plans but cargo.one was talking about what could be done today.

He says: “It was a quick iteration of next steps and that just clicked with our team. We were quite happy and did quite a lot of things differently as a result. Using cargo.one is a kind a-ha moment for a new booking experience, you see it like Expedia or Kayak because it just works and we wanted to be part of it.”

Celetaria says: “When we were talking internally about IT solutions, we have a strategic vision and digitalisation team so you look into different types of solutions but this was something that we felt we could do very fast so we decided to go with cargo.one.”

Saying the integration has been successful, Claussen adds that it was important to bring together teams who are looking to create something rather than just talk about a plan.

He says: “For us it was a perfect match, on both ends we had people who wanted to create something in a really short-term timeframe.”

The partnership started on a technical level in mid-June and the first bookings started coming in at the end of August. The teams worked in two week sprint cycles to release new codes and features, and test them with the customer to ensure they worked.

Adding that the industry has been working on visibility and transparency for some time, Demmer says full transparency of booking is new to cargo.

He says: “In many ways you wonder how the industry has survived with the expectation that it isn’t transparent and takes 15 minutes to two hours to know whether there’s capacity and what the price is. My expectation is that it will begin to change the way forwarders and customers think how they book as they have access to more data.”

Celetaria says customer feedback has been positive due to the speed, ease of use and transparency.

He says: “For us, it’s a game-changer having a wider range of customers, so you can more easily reach smaller and mid-size forwarders as well. In terms of bookings, it’s mid-sized forwarders who have been most active with requests, so it’s very positive.”

Claussen foresees a time when a service such as cargo.one will become the standard way of booking a shipment, at least if it is not too complicated.

He says: “We already see that for a number of smaller and medium sized forwarders that had difficulties in the past reaching carriers. There tends to be a focus on larger customers but if we look at the market, smaller forwarders make up a large chunk of the market and we see they’re booking more of their volumes. We also see it with a number of larger forwarders because they can save so much time, get quotes fast and go back to the shipper all in one go. They win business so for those customers, when they have booked once with us the conversion rate of doing the second, third and fourth booking is extremely high.”