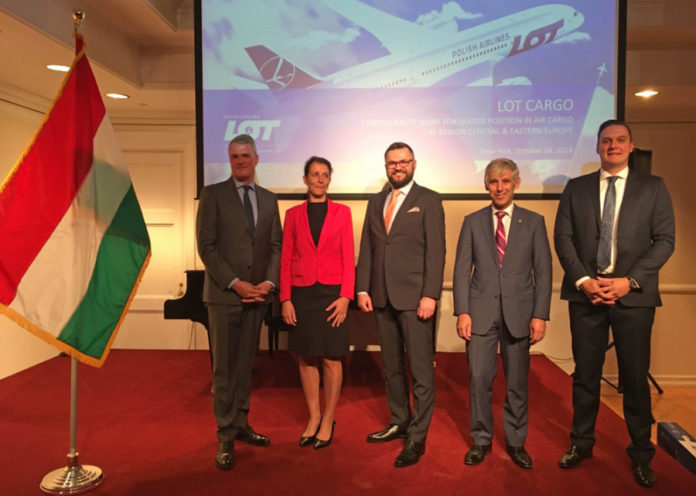 Budapest Airport and LOT Polish Airlines have met with US business people and logistics companies to describe the opportunities on offer in the region.

The opportunities come from LOT launching year-round services from Budapest to New York and Chicago offering 10-12 tonnes of belly cargo on each flight.

The connections offer opportunities for American companies to reach out to clients in Central Europe via Budapest and for Hungarian businesses to transport their products.

Hungarian electronics, automotive and pharmaceuticals traditionally use cargo aircraft to deliver their goods worldwide, including to the US.

Airport representatives used the opportunity to outline the scope of development projects within the framework of the BUD 2020 programme.

The warehouse is due to be handed over to dedicated cargo operators during the second half of 2019, together with a 32,000 square metre cargo apron to enable simultaneous handling of two Boeing 747-8F size aircraft.

Speaking at a meeting facilitated by the Consulate General of Hungary in New York, Budapest Airport’s director business unit property and cargo, Rene Droese says: “Our aim is to develop Budapest Airport into a cargo hub for export and import between North America and Central Eastern Europe. Our market surveys confirm approximately 1.5 million tons of annual air cargo volume in our catchment zone, which provides a good basis for current and new cargo flight connections.”

Droese was joined by LOT cargo director, Michal Grochowski and Consulate of Hungary in New York economic and trade commissioner, Judit Czako who described the business opportunities for US companies in Hungary and the Central European region.

Czako says: “Economic cooperation in terms of FDI and export-import is excellent and stable between Hungary and the USA. The direct flight connection is encouraging, not only in business, but also in tourism and many other areas, and it further enhances the already strong relations between our countries.”

Grochowski adds: “LOT Polish Airlines plans to become the leading cargo airline in the Central Eastern European region, and Budapest Airport has a significant role in this development in the southern part of the CEE region.”