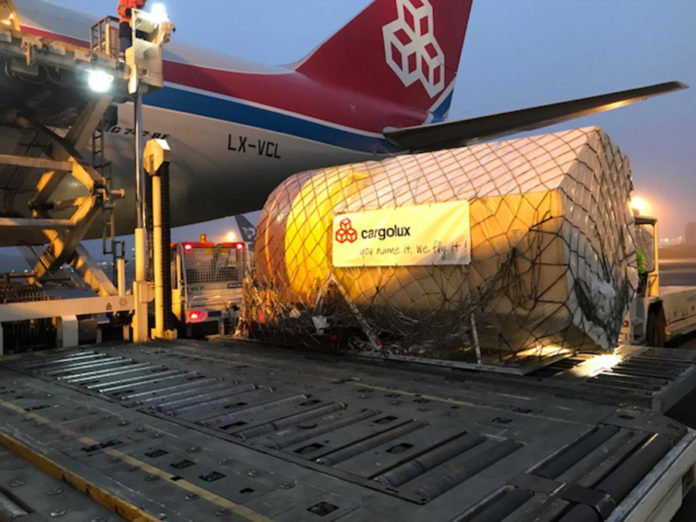 Cargolux has flown two shipments of outsized and highly sensitive measuring buoys from Luxembourg to China for offshore wind farms off the coast of Fujian province.

The airline worked with Globaltrans Internationale Logistik to transport the two high-tech buoys to Xiamen, to be used in the planned Zhangpu and Changle wind farms.

The buoys measure 8.1 metres and have a diameter of 2.5 metres, and weigh 5.8 tonnes each.

They were transported by Globaltrans with special trailers from Bremerhaven in Germany to Luxembourg, and flown on two Cargolux Boeing 747 Freighters to Xiamen.

Cargolux completed the loading in Luxembourg and unloading in Xiamen, and after special customs clearance both buoys were on-forwarded by specialised trucks to their final destination of Fuzhou.

Cargolux vice president of sales, Chris Nielen says: “At Cargolux, we are proud to be involved in the shipment of this highly sensitive cargo and working together with a specialised freight forwarding company as Globaltrans Germany and their important client who appreciate the advantages of our CV Jumbo product and 747 freighters.”

Globaltrans Germany chief executive officer, Kay Uwe Gretsch says: “To ensure safest transportation, the weight and complex dimensions of the buoys, with its very sensitive electronic equipment, required the design and manufacture of special transport frames. In addition we were challenged by a very time sensitive shipment, not allowing us any complications or delays.”

“Therefore, we have decided to use Cargolux’s 747 Freighters to Xiamen, offering us shoring expertise, long-standing experience and tailor-made solutions for heavy or outsized shipments. It was a pleasure for us to cooperate hand in hand with Cargolux on this special cargo shipment.”

This is the first time an offshore wind-measuring campaign in China has used a so-called ‘Floating LiDAR system’.

The buoys were designed by the German Fraunhofer Institut and will measure the wind speed in the designated locations up to a height of 200 metres from their position on the sea surface to allow precise calculation of the wind farms’ electricity yield.

The new Chinese wind parks have a planned capacity of 2.8GW.