On the return trip, the freighter will stop in Miami and Liege, Belgium, before arriving in Doha. Officials from MIA and Qatar Airways Cargo celebrated the new service with a reception on 13 February, after a return flight from Quito.

“As the busiest US airport for international freight and for cargo traffic within the Americas, we expect them to see continued success on their new Miami cargo routes.”

Qatar Airways Cargo will handle temperature-sensitive commodities out of Sao Paulo, Buenos Aires and Quito such as fresh flowers and pharmaceuticals, in addition to high-value imports into South America including medicine, automotive equipment, chemical products, high-tech commodities and equipment for the oil and gas industry.

Qatar Airways chief officer for cargo, Ulrich Ogiermann says: “We would like to thank MIA, local authorities and our valued customers for their tremendous support in making our newly launched freighter services in Miami another great success. 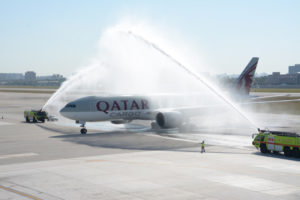 “Florida is an exporting powerhouse equipped with robust trade and supply chain infrastructure. We have been anticipating this excellent opportunity to expand our capacity and services into Miami in parallel with Florida’s trade growth as we aim to connect its export businesses with more than 150 destinations around the world via our state-of-the-art Doha hub.”

MIA broke its 2015 record for total annual freight traffic last year, growing 0.37 per cent to 2.18 million tonnes in 2016. MIA also continued to be among the world’s top 10 hubs for international freight, with 1.9 million tons of international shipments last year.