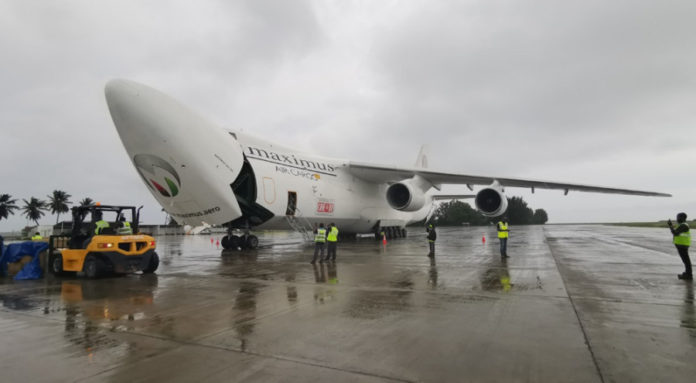 Chapman Freeborn has teamed up with Maximus Air to deliver an MRI machine to Addu Atoll, the southernmost atoll of the Maldives archipelago.

The machine is being installed at Hithadhoo Regional Hospital in Addu Atoll and was delivered with 166 components to allow the hospital to be opened on time.

It will provide medical services for 76,000 people without the need to fly to the capital of the Maldives, Malé 350 miles away.

To deliver the machine, Chapman Freeborn worked with Maximus Air to charter an Antonov AN-124 from Al Maktoum International Airport in Dubai.

The delivery marked the first time an AN-124 had landed at Gan International Airport, which completed a runway extension and other upgrades in 2016.

Because of limited cargo-handling capabilities at Gan, Chapman Freeborn project managers accompanied the cargo on the six-hour flight to help oversee unloading and handling of the shipment.

Vikas Chaturvedi, commercial manager cargo at Chapman Freeborn Dubai says: “We’re delighted to have successfully arranged this charter with Maximus. Transporting this type of medical equipment on short notice requires careful planning and close attention to detail. Our strength lies with our global reach and the aviation professionals working with Chapman Freeborn. We want to thank the team at Maximus and Wings 24 for their valuable support.”

Samir Ramadan, vice president commercial at Maximus Air says: “The moment this enquiry came to us from Chapman Freeborn, we realised the importance of on-time delivery for this MRI machine. All departments at Maximus got into action and synchronised as this was first ever AN-124 operation into Gan island. We are very proud to be part of this project and successfully operate this charter within 48 hours of its confirmation.”