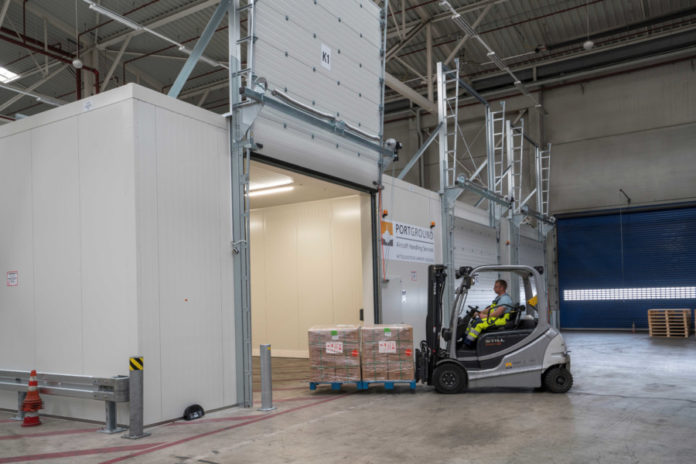 The facility has direct access to the apron area and therefore guarantees short transport routes to and from aircraft and trucks.

The configuration of the refrigeration centre enables parallel storage of pharmaceutical items and perishable goods as well as temperature-sensitive products, which may not be stored or transported in frosty or hot conditions. They include measuring devices or means of production for the semi-conductor industry.

The commissioning of the site also marks the certification of the warehouse area according to the European Good Distribution Practice (GDP) standard.

Goods can be stored at temperatures ranging from +2 degrees Celsius to +25 degrees Celsius at the new refrigerated facility, which is operated by PortGround – a subsidiary of Mitteldeutsche Flughafen and a specialist for aircraft and freight handling.

The temperature can be individually set in three separate areas and access controls and video and temperature monitoring guarantee high standards of reliability.

PortGround managing director, Alexander König says: “The new refrigerated warehouse for air freight expands our extensive logistics portfolio and is particularly interesting for companies in the pharmaceutical, food and semi-conductor industries in Germany and Eastern Europe.”

He adds: “Our customers not only benefit from the variety of services provided by PortGround when handling all kinds of freight, but also from access to a route network, which covered more than 220 destinations around the globe from Europe’s fifth-largest cargo airport last year.”