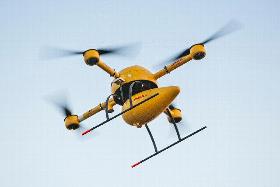 A cargo drone pilot project to deliver medicine to Germany’s North Sea island of Juist is to be undertaken by DHL, but the integrator was not available to say when.

The five kilogramme drone, a remote controlled helicopter with four rotors (see picture) and called a quadcopter, will automatically fly the 12 kilometre distance to the island at an altitude of 165 feet and at speeds of about 65 kilometres per hour,  depending on head winds.

Called the Parcelcopter, it  takes off and lands from prepared sites at the coastal town of Norddeich (Germany) and on Juist. A courier will receive the medical cargo and take it to its final destination. The drone will be monitored by a  ground station, which in turn will be in contact with air traffic control.

“Our DHL Parcelcopter 2.0 is already one of the safest and most reliable flight systems in its class,” says Deutsche Post DHL’s post parcel division’s chief executive officer, Jürgen Gerdes. “We are proud that this additional service can create added value for the residents of and visitors to the island of Juist and are pleased with the support we have received from the involved communities and agencies.”

DHL began its drone work in December last year. That month the Parcelcopter made its first flight. Since then it has been modified to be able to cope with maritime weather.

The Parcelcopter has a camera and will transmit data back to the ground station. The Parcelcopter project involves Aachen University and the company Microdrones. The flights have been approved by the German government’s Ministry of transport and digital Infrastructure, Juist island, Norden city (Germany), and the Wattenmeer national park administrative unit.