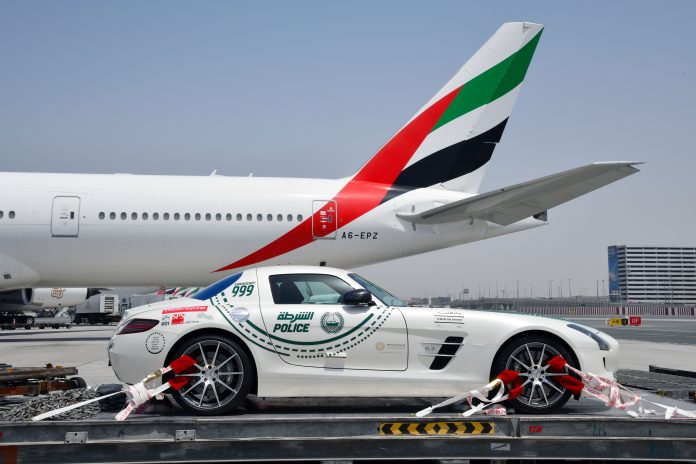 Ferrari, Maserati and Lamborghini are all quintessentially Italian luxury cars, so it is no surprise that the country is host to one of the oldest celebrations of classic and supercars in the world, the “Mille Miglia”.

The race, which is dubbed “The Most Beautiful Race in the World”, was founded in 1927 and has been taking place annually in Italy as a regularity race since 1977. It has grown into a major event that attracts car enthusiast, collectors and celebrities.

Emirates SkyCargo shipped the Dubai Police’s supercar on a return trip from Dubai to Italy to take part in the thousand-mile grand tour of Italy alongside a remarkable collection of vintage supercars. Dubai Police joined the ‘Mille Miglia’ classic car race, from Brescia to Rome and back, with a V8 571 PS Mercedes-Benz SLS AMG.

The supercar was transported on a Boeing 777 freighter aircraft which has one of the widest main deck doors of its aircraft type, allowing for easy loading and unloading of outsized cargo.

Emirates SkyCargo is experienced with moving all types of vehicles on its aircraft, including high-end cars for racing events or collectors’ cars for concourse events. To ensure the safe and efficient transportation of high-end cars, Emirates has developed a specialised product called Emirates Wheels, which outlines specific procedures for handling cars, including loading and unloading them from the aircraft.

Emirates says safety is a primary consideration. The carrier has a team of car loading supervisors to ensure that the vehicles are correctly manoeuvred on and off the aircraft and who accompany the vehicle to its destination.

The Emirates Wheels team also has a special reservation procedure for vehicles loaded in the belly hold of a passenger aircraft. Emirates makes a point to not engage the engine when loading or unloading the vehicle to reduce the possibility of heat damage to the car and to mitigate any risk to the aircraft.