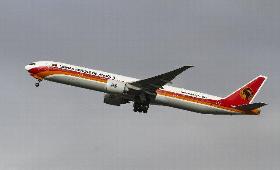 Emirates is to take a role in the management of TAAG Linhas Aéreas De Angola (TAAG) as part of a 10 year deal.

The airlines will cooperate across a wide range of areas, including bilateral code-sharing on cargo services and cargo handling. The Middle Eastern airline signed a 10 year management concession agreement with TAAG’s majority shareholder, the Republic of Angola, on 30 September.

The agreement lays the foundation for both airlines to explore commercial opportunities in Africa and beyond. The two parties stressed that the agreement will take effect only if certain, unspecified, conditions are met. The 10 year agreement was signed by His Highness Sheikh Ahmed bin Saeed Al Maktoum (see picture), chairman and chief executive, Emirates Airline and Group and His Excellency Augusto da Silva Tomás, the minister of transport for the government of Angola.

As part of the agreement, Emirates will work with the Angolan government and TAAG to implement a business plan, provide management support and devise fleet and route network strategies.

Emirates will not contribute equity under this agreement, but will appoint four of its senior managers to work for TAAG. Emirates has also committed to allocate its resources for staff and crew training on best-in-class business and operational processes and systems.

“Through this partnership Emirates aims to provide deeper reach and better connectivity for our passengers in central and South Africa. At the same time, we see an opportunity for TAAG Linhas Aéreas De Angola passengers to benefit from Emirates’ global network”, says Sheikh Ahmed.

“We see huge potential in Africa, and are keen to continue playing an active role in contributing to its economies. We believe this new partnership will build on the success that we have seen on our Dubai-Luanda service, and also deliver operational and business synergies for both airlines.”

Da Silva Tomás, adds that the signing of the agreement marked, “a very decisive step towards the restructuring of TAAG. With Emirates, our new partner and a leader in the world of civil aviation, equipped with know-how, technology and experience, TAAG is starting a new era of growth and progress which will also positively impact the development of Angola.”

Angola is Africa’s second largest oil producer, with a strong mining sector and is one of the fastest growing economies in the world.