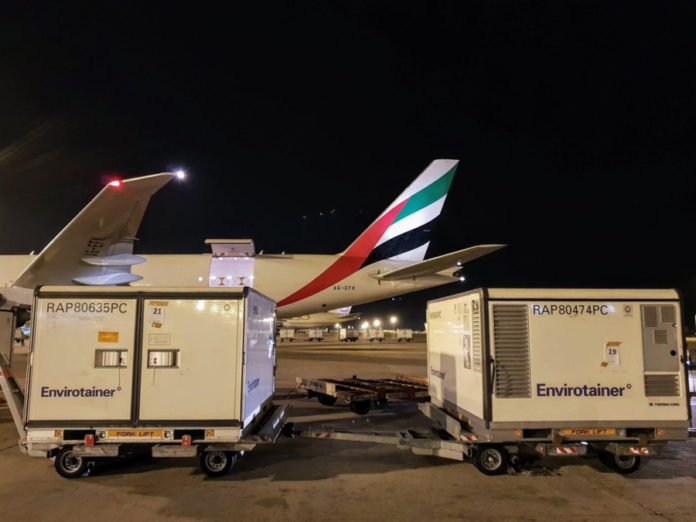 Emirates SkyCargo has transported over 25 tonnes of vaccines from Milan to Belo Horizonte, the first time the Brazilian airport has received such a large shipment of vaccines.

The shipment of 1.8 million doses had to be transported in specialised containers to remain at a constant temperature of 5C.

A total of 36 Envirotainer containers were loaded on the chartered freighter in Milan, one of the designated airports in Emirates SkyCargo’s pharma corridor programme, which aims to provide supplementary protection for pharma product integrity during air transport.

On arrival at BH Airport, the vaccines were removed from the containers and transported to the temperature controlled storage areas of the airport.

Emirates senior vice president – cargo planning and freighters, Hiran Perera says: “We planned every detail of this charter very carefully with our partners from mid-July to ensure that the vaccines would be delivered carefully to Belo Horizonte airport.”

Belo Horizonte Airport cargo manager, Peter Robbe says: “Negotiations for the arrival of this shipment included the visit of technical professionals who checked the storage conditions of our chambers considered to be the latest generation.”

He adds: “To take advantage of the potential of the cargo logistics area of the Airport, BH Airport has invested in a new configuration of the Cargo Terminal and has installed two new refrigerated chambers to triple cool chain storage capacity to 3,350 m³.”

On average, Emirates SkyCargo transported about 80,000 pharma shipments every year, varying in size from small clinical trials to pharma charters on freighter aircraft.