Members of the media including Air Cargo Week were given a tour of the Emirates SkyPharma facility and attended the official opening.

His Highness Sheikh Ahmed bin Saeed Al Maktoum, chairman of chief executive of Emirates Airlines and Group, inaugurated the state-of-the-art facility and cut the ribbon to mark the opening.

Emirates SkyPharma covers an area of 4,000 square metres and is part of an 11,000 square metre extension project costing 600 million Emirati Dirham ($165 million) made at the carrier’s SkyCentral terminal. This brings its total dedicated pharma space across DXB and Dubai World Central (DWC) to 8,600 square metres.

Emirates SkyCargo has also been awarded the certification of compliance under the European Union Good Distribution Practice (GDP) guidelines for medicinal products for human use by German auditor – Bureau Veritas.

The Dubai-based carrier becomes the first in the world that has obtained GDP for its hub operations covering two airports – DXB and DWC and the 24/7 bonded trucking service that connects cargo between them.

Emirates SkyCargo divisional senior vice president for cargo, Nabil Sultan explains to journalists at a press conference: “Pharmaceuticals are one of most important products we transport because of the impact on people’s lives and communities across the world.

“As a leader in the global air cargo industry we decided that it was not only important for us to build state-of-the-art cool chain facilities for the transport of pharma products, but to also go the extra mile and ensure the compliance of our operations against the highest international standards.”

Sultan says the facility is set to lead to an annual uplift in pharma cargo of around 24-25 per cent and will boost opportunities in the growing pharma market. In 2015, Emirates SkyCargo handled 11,000 tonnes of pharma.

Sultan also says Emirates SkyCargo opted for GDP rather than the International Air Transport Association’s Center of Excellence for Independent Validators in Pharmaceutical Logistics (CEIV Pharma) as it was what “customers wanted” after a survey was carried out speaking to forwarders and different parts of the chain.

He says the choice was purely driven from this research it undertook and it made the decision to meet the needs and requirements of customers and it made “perfect sense” to opt for GDP.

Sultan also says the carrier plans on creating standardised end-to-end pharma trade lanes to destinations where there is high demand, which will take at least a year before they can be developed and the “task is big”.

Lanes will have to be first identified and there then must be the required temperature-controlled facilities and infrastructure in place at the end destination before it can be started, which might take sometime to develop.

Sultan notes for Emirates and much of the air cargo industry, the strongest pharma trade lanes are to Europe notably from Switzerland and Germany and on to Asia, which makes up around 50 per cent of pharma activity, while the India to US lane makes up around 30 per cent. 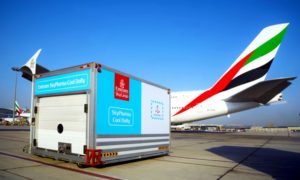 The carrier operates 13 Boeing 777 Freighters and two Boeing 747 Freighters, and has a massive bellyhold capacity through its fleet of 94 Airbus aircraft and 146 Boeing’s.