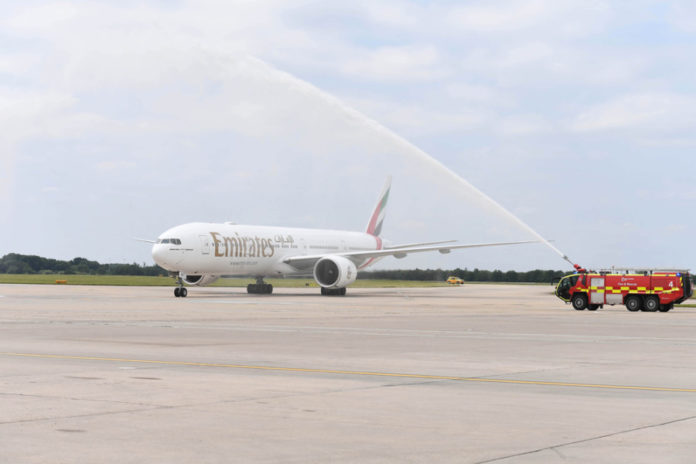 Emirates’ first flight to London’s Stansted Airport touched down on Friday 8 June, bringing the total number of flights between Dubai and the London airports to 10 a day.

The Boeing 777-300ER touched down just before 14.00h, making Stansted the 7th airport in the UK from which Emirates operates, and the third in London after Gatwick and Heathrow.

Frach says: “There’s been a real appetite for increased connectivity between the thriving business community in the East of England and our global network too. The new gateway will support the swell of new start-ups, SMEs and established businesses in the London Stansted Cambridge Corridor by giving them access to new cities and countries across the globe.”

More than 25 of the world’s largest corporations have established operations in the wider Cambridge and Peterborough area including Airbus, AstraZeneca, ARM and GSK who will benefit from easier trading and business connections.

O’Toole adds: “In 2018 Stansted is set to be the fastest growing London airport and a key enabler of economic growth for both the UK and East of England, and the addition of the new Emirates service will provide a further boost to our long haul ambitions and ultimately save local passengers valuable time and money that is associated with flying from other airports across London.”

The flights will offer local businesses about 20 tonnes of cargo capacity per flight, connecting cargo customers to over 155 cities across 85 countries.