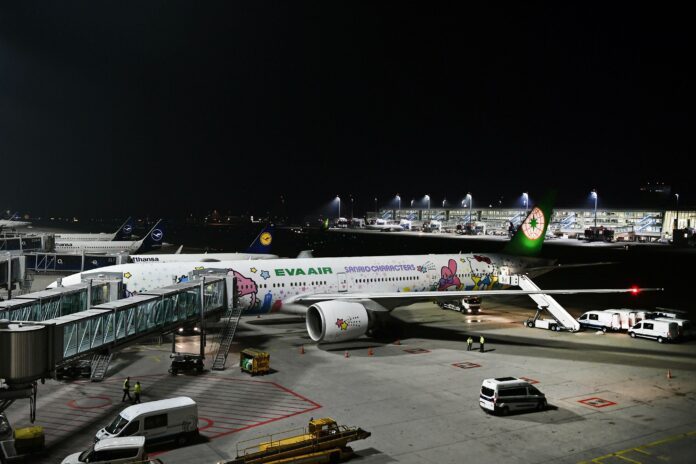 Taiwanese airline EVA AIR is heading to Germany for the first time, offering four flights a week from Taipei to Munich. Flights to the Taiwanese metropolis will leave from Munich on Mondays, Wednesdays, Fridays, and Saturdays. A modern Dreamliner – the long-haul aircraft Boeing 787-9  will be used. The first flight was operated by a Boeing 777 with a special livery.

The carrier, which has been a member of Star Alliance since 2013, already flies to five other European cities – London, Paris, Amsterdam, Vienna and Milan. EVA AIR currently serves 68 destinations on four continents. Its fleet consists of 90 aircraft, approximately two-thirds are long-haul jets.

Jost Lammers, CEO of Munich Airport, is delighted about the attractive newcomer: “We welcome EVA AIR as a new star in the Munich sky. EVA AIR complements our diverse Asian offering, especially with its excellent transfer connections. The launch of the new operations between Taipei and Munich expands our intercontinental network and is also a positive sign for the continuous recovery of traffic at Munich Airport.”

“The new partnership between this premium airline and our five-star airport is a perfect match and finally provides Bavarian companies and tourists alike with a direct connection to the Asian business and cultural center,” adds Jan-Henrik Andersson, CCO of Munich Airport.

Taiwan is the fifth-largest Asian economy and a major trading partner for Germany. The island nation’s most important industry is the manufacture of electronic components. Other significant sectors for the country are chemicals, mechanical engineering, biotechnology, energy and automotive. By virtue of its various sites of interest, including numerous temples, and its many national parks, beaches and mountains, Taiwan is also a popular tourist destination for culture-enthusiasts and adventure-seekers.