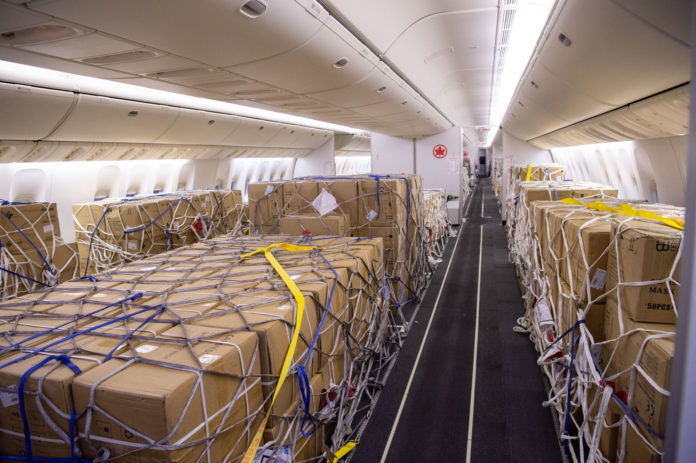 On Saturday, April 18, AC2284, the first commercial flight operated on Air Canada’s newly remodeled Boeing 777-300ER aircraft, transporting nine tonnes of masks in its cabin, as well as other PPE supplies like gowns in its cargo hold. The aircraft carried approximately 30 tonnes of freight including over 1,000 boxes of masks in the cabin. The flight was loaded with freight in Shanghai and arrived Saturday evening at Trudeau International Airport, Montreal, QC.

“It is an amazing testimony to employees throughout all of Air Canada that we have gone from a conceptual idea two weeks ago; to converting a Boeing 777 for cargo” said Tim Strauss, vice president, Cargo.

“This includes the regulatory oversight of Transport Canada, the engineering work of Avianor and the incredible work of the Air Canada Maintenance organization to ready the aircraft, as well as developing procedures and training for the operational and safety aspects of the newly converted aircraft. Now having completed our first mission from Shanghai to Montreal, I must say it is a beautiful thing to see a plan that comes together with such speed and professionalism.”

A cross-sectional team including employees from Air Canada’s airport, cabin and cargo groups took a little over an hour to unload the boxes from the cabin, using high lifts, gravity loaders and a PTV (passenger transport vehicle) supplied by Aéroport de Montréal.

The operation was performed in strict adherence to Air Canada’s health and safety guidelines.

Strauss said: “We now have three of the Boeing 777C aircraft in the new configuration and flying active routes and will add more aircraft to this fleet in the coming weeks.”

Air Canada Cargo current operational highlights include scheduled widebody flights to London, Frankfurt, Paris, Hongkong, Shanghai, and starting this week, Tokyo Narita. Ad-hoc all-cargo flights on Boeing 777 and 787-9 aircraft are available on demand to almost anywhere in the world. More than 106 such flights have operated so far, mostly from Toronto to Europe and Asia.