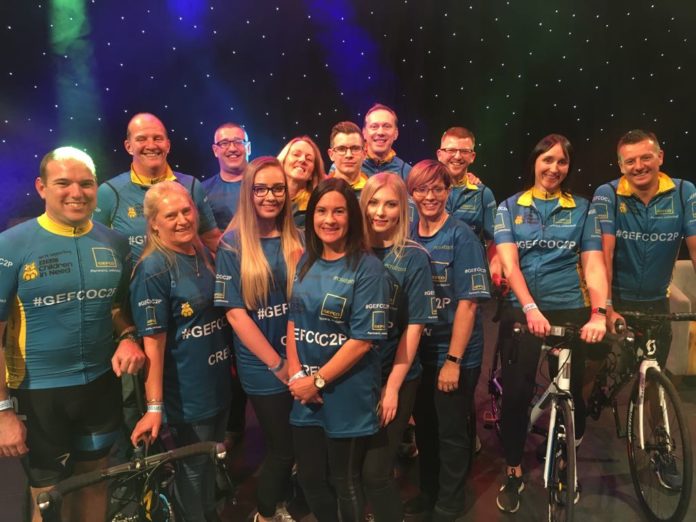 A group of 47 cyclists from GEFCO UK has smashed their fundraising target of £50,000 after successfully cycling 300 miles from Coventry to Paris for BBC Children in Need.

Several members from the GEFCO UK cycling team joined the BBC Midlands Today team at Wolverhampton Grand Theatre for the BBC Children in Need live broadcast on 16th November, to celebrate their achievement with other fundraisers from the region.

“At GEFCO UK, we are hugely supportive of team building initiatives, especially when they are focused on raising money for a worthwhile charity like BBC Children in Need,” said GEFCO UK director of human resources Helen Grover.

“We are extremely proud of our cycling team who pulled together to train on weekends and complete the challenge with flying colours, despite many of them not knowing each other before.

“Appearing on BBC Midlands Today for the live Children in Need show was an honour for the team and it was a fabulous end to our fundraising challenge.”

The GEFCO UK cycling team were supported by fitness trainers from Freestyle 360 during the challenge, which was also part of GEFCO UK’s commitment to encouraging health and wellbeing and team building amongst its staff.

“The Coventry to Paris cycle challenge not only resulted in £50,000 being raised for charity, but led to new friendships being formed, healthy lifestyles being adopted and a strong sense of community amongst our GEFCO UK sites,” added Grover.

“The Coventry to Paris cycle challenge was a huge success and we are looking forward to further team building activities in the future.”

The team of cyclists set off from GEFCO UK’s Coventry headquarters at Prologis Park on Friday 7 September and made pit stops at Blenheim Palace, Oxfordshire, and a pub owned by a popular enterainer, The Mulberry Inn, Surrey, before arriving at GEFCO’s Courbevoie facility in France on Monday 10 September.