Air Charter Service (ACS) is seeing growth in all regions as the opening of new offices pays dividends, but it is finding some sectors a struggle, including the oil and gas (O&G) segment.

He says the US has been stable, and in general ACS “could not ask for more” and this financial year has been exactly what he was looking for and he is happy with the overall progress.

Most offices he explains have showed good growth and one region he definitely sees more expansion in is Asia. However, in Lancaster’s view he does not see this happening immediately as it takes time to grow, but he forecasts in the future business will grow “massively”.

Lancaster says the UK-headquartered company has had a very positive second half of the year and if it continues at the same rate, it will put ACS in a very good position for 2017.

The air charter cargo market it seems has been fairly protected from the overall slowdown in airfreight and in his view the charter market has outstripped the general air cargo market’s performance this year.

But Lancaster says the O&G market has proven a challenge, but as it now has 20 offices and 200-plus charter brokers across the globe, it is able to weather the storm and any slowdowns in individual sectors.

Earlier this year, ACS started Australasian operations with an office in Sydney, Australia and also opened an expanded office in Los Angeles.

He says it helps that ACS is not reliant on O&G but it is ideally positioned in various regions for when it comes back, in say 2018. 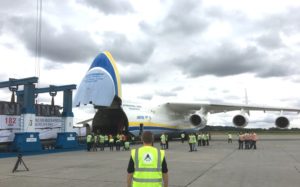 Lancaster notes: “We opened Houston for O&G and they have held their own, and when O&G comes back we will still be there and ready, but so much is out of our control and is due to macro-economics and there is not much we can do about it – it is out of our hands.”

A few years ago he says O&G made up a massive “slice of the air charter pie” but the sector has taken a “drubbing” due to the plunging of oil prices around the globe, which has seen O&G projects shelved and slow to a halt.

In October, ACS sold a minority stake to Alcuin Capital Partners to help it accelerate its growth plans and is set to make acquisitions in the coming months. The investment will bring access to capital and Alcuin’s expertise in corporate acquisition strategy ACS says will be “invaluable” for implementing growth plans.

Although Lancaster could not reveal exact acquisition targets and plans, he says, “there comes a time when you have to look at other products” using its successful on-board courier (OBC) venture, which it launched last year, as an example of how it has expanded its offering.

The company developed its OBC division in Asia earlier in 2016 with a new dedicated team in its Hong Kong office and is set to pump further funds into the product.

He also notes: “We could look at similar things to that (OBC) where we can grow. If opportunities arise and if we can do well and it fits in with our core offering, we will look at investing.”

And Lancaster says ACS does not have any immediate plans to open more offices, but it is always open to opportunities and keeps an eye on the market, although the focus for now is on building up the ones it has.

He adds: “We are not going to rush into it and have to take our time. We normally start planning an office a long way off. It is a significant investment so we have to make sure we are making the right decision.”

Africa could be one region for another office as there are exciting opportunities in Lancaster’s opinion, but he says there continues to be logistical and infrastructure challenges.

However, he notes East and West Africa is being particularly interesting, but does not envisage North Africa as a target as the region can be easily served from say, France.

And Lancaster’s target as CCO is quite clear, turn ACS into a billion dollar company. The goal is in his view attainable if the charter firm continues the way it has been going.

“We just need to keep doing what we are doing, building up the number of brokers and opening offices and we can get there. We have to have that goal in the company.”