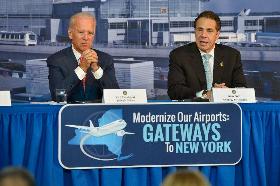 Stewart international airport is to become a regional cargo distribution hub, relieving John F. Kennedy International Airport (JFK) of most cargo facilities, in an announcement by New York governor, Andrew Cuomo, who was joined by US vice president, Joe Biden.

In a press conference on 20 October, called Modernize our Airports: Gateways to New York, Cuomo announced that Stewart’s cargo capacity would grow, while LaGuardia Airport and JFK would be subject to full redesigns to modernise their facilities. A tax free zone will also be established at Stewart to give businesses that relocate there 10 years of tax-free development to help expansion. FedEx and UPS operate scheduled flights to Stewart and the United States Postal Service and US Department of Agriculture have facilities at the airport.

Cuomo (pictured on right, credit governor Andrew Cuomo) says: “Our airport modernisation plan not only enhances how our individual airport look and act in the 21st century, but addresses how they must fundamentally work together to strategically grow New York’s economy.”

He also announced master plan design competitions to revitalise the facilities at LaGuardia and JFK. Cuomo says designs must consider transport links to the airports, redesigning airport layout to increase access, modern amenities and resilient infrastructure to cope with extreme weather. The competition will begin in mid-November and design firms will have 60 days to develop plans, including implementation timeframes. Finalists selected by the Port Authority of New York and New Jersey board of commissioners will receive up to $500,000 to further develop concepts.

In Cuomo’s state of the state address in January 2014, he announced his office would assume management responsibility of JFK and LaGuardia from the Port Authority as part of a $17 billion project called Reimagining New York for a New Reality. He said LaGuardia was ranked as the worst airport in the US and, “that is a disgrace my friends and it is unacceptable and it is going to change. We are going to redevelop those airports.”