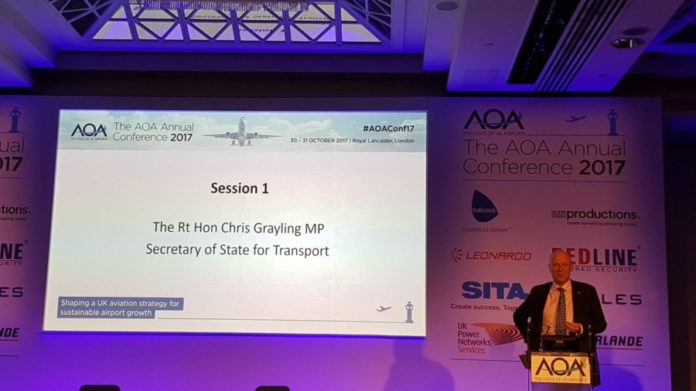 Aircraft will continue to fly into and out of the UK post-Brexit and the government is on track to deliver a 3rd runway at Heathrow Airport, delegates at the Airport Operators Association (AOA) Conference heard on Monday, 30 October in London.

Much concern has been raised in the aviation industry whether the current open skies deal with the European Union (EU) will continue and if the UK will remain in these agreements. But from the day the UK leaves the EU, on 29 March 2019, there is currently no framework for flights to operate between the UK and Europe.

However, this was rubbished by the UK Government’s secretary of state for transport, Chris Grayling who said he is seeking to keep current open skies agreements in place.

He says: “It is inconceivable that the planes will stop flying. It will not happen and the industry can look to the future with confidence. I am looking for positive open skies agreements. I see under no circumstances that planes will not be able to fly to and from the UK to the EU. We will be ready to replace the existing arrangements with EU countries.”

Grayling adds: “Detailed work is happening today and I am confident we will have a very sensible partnership with the EU in the future and aviation will be a central part of that. We are making rapid progress to secure post-Brexit agreements with all these countries in the EU.”

The government has given its backing for a 3rd runway at Heathrow, which is heavily backed by the freight community, and a vote on the expansion is set to take place at the Houses of Parliament in the first half of next year.

Grayling is sure the vote will pass: “I am very confident we will have the majority in Parliament to get the Heathrow expansion delivered.

“We need to get get through the consultation process and try and make sure we get this right. It is our view we should expand Heathrow, but we should listen to concerns, but I remain pretty confident MPs share my view. It will benefit the whole of the UK including regional airports, connectivity and the economy.”

Grayling also pointed out that a recent government report released last month suggested the 3rd runway development can meet environmental targets, often seen by many as a major hurdle in getting it delivered. He adds: “We should have taken this decision decades ago and I am determined to get this through.”

In a later conference session, Heathrow’s chief executive officer (CEO), John Holland-Kaye talked of the importance of cargo to the UK economy and says air cargo plays a vital role in future success of the UK economy and adds it can be “underestimated”, while post-Brexit it will be even more important.

Holland-Kaye notes 80 per cent of air cargo is moved through the London hub and it plays an integral role in the movement of goods, especially exports.

During the same panel debate, Gatwick Airport CEO, Stewart Wingate also called for his gateway to get a 2nd runway: “We are very happy for Heathrow to go ahead, but we want to as well as we can privately fund it. The UK can have the best of both world’s by having one at both.”