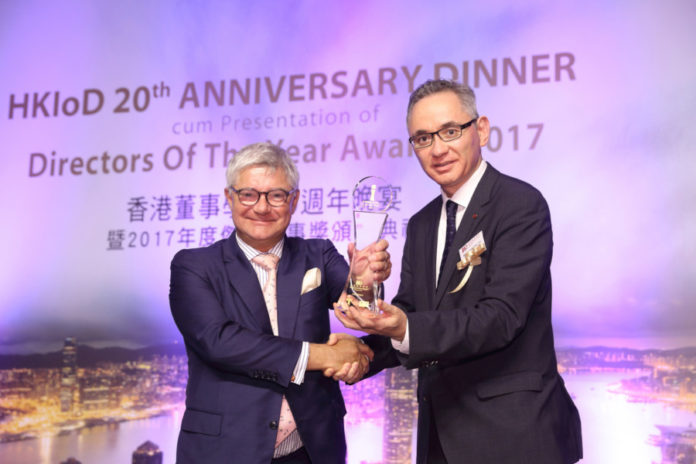 The Hong Kong Institute of Directors (HKIoD) has named Hactl Chief Executive Mark Whitehead as a winner in its 2017 Directors Of The Year Awards.

Whitehead was one of twelve recipients, and one of only three from private companies. This year’s edition of the Awards centred on the theme ‘Belt and Road: Corporate Governance in Times of Opportunities’, echoing the vision and farsightedness behind the ‘Belt and Road’ initiative, which the HKIoD says is one of the most significant development blueprints in the 21st century.

The HKIoD award citation stated: “Mr. Mark Whitehead has strong management experience and a track record of delivering commercial results. He has demonstrated the implementation of high corporate governance standards.

“He attaches great importance to talent development and succession planning, which contributes to the company’s sustainable growth. With well-rounded knowledge and skills and a strong code of ethics and integrity, Mr. Whitehead is deserving of the Award.”

The award was presented to Whitehead by Dr Christopher To, deputy chairman of The Hong Kong Institute of Directors at a prestigious event attended by over 600 high-ranking representatives of Hong Kong Government, commerce and industry.

Accepting the award, Whitehead caused great amusement by telling the audience that he was about to catch a flight to the UK “To see my 85-year-old mother and give this to her!” He added: “I love the logistics business, and Hactl is part of that. This is for the 2,500 people who helped to put the food on the tables here tonight. I can’t tell you how proud I am to receive this award on their behalf.”