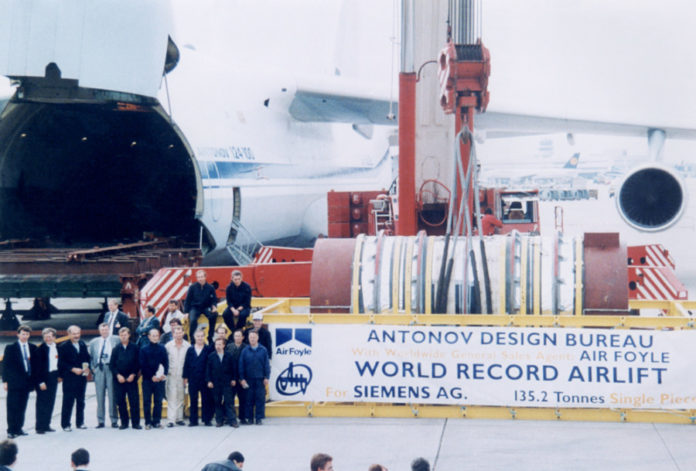 Antonov Airlines has turned 30, and as it celebrates this milestone it is looking to future endeavours in the breakbulk and air cargo market.

The airline was founded in 1989 and pioneered the transportation of outsize and heavy cargo across the globe, holding the record for the heaviest single piece of cargo transported by air, among others.

Graham Witton, managing director of Antonov Airlines says: “As we look back on thirty years of Antonov Airlines, and the projects that we have completed, we see one of our strengths is the flexibility of our business to adapt to changing markets.”

He adds: “We are transporting more outsize cargo than ever before, anything from wind turbine components to city centre trams, and practically anything in between. We are also moving further into the aerospace industry as digital communications become more integral in the global economy.”

On 11 August 2009, the Antonov AN-225 Mriya transported a generator with a total payload of 187.6 tonnes from Frankfurt, Germany to Yerevan, Armenia, breaking the record for the heaviest single piece of air cargo ever transported.

Paul Furlonger, director of Antonov Airlines who has been with the company since the beginning says that in the early days, many items such as satellite containers, generators and transformers were too big or heavy to fly on conventional freighters.

As the first commercial operator of the AN-124-100, Antonov Airlines had to quickly pioneer loading methods using creativity and flexibility.

He says: “At the beginning, we were doing things for the first time, almost every time, and over the years, after many thousands of flights, our processes have become more refined and our expertise enhanced so that we now undertake ever more challenging and complex projects with absolute confidence.”