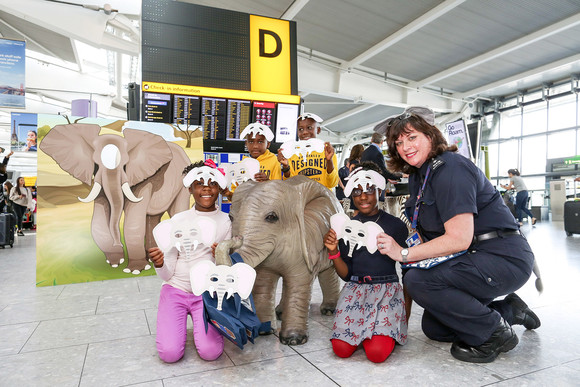 Heathrow Airport and IAG Cargo have teamed-up to celebrate World Elephant Day and help stomp out illegal trade of wildlife.

The UK hub has created and installed a pop-up interactive display at the airport’s Terminal 5 today, which will be run in partnership with Border Force and IAG Cargo.

It will support United for Wildlife’s ‘United for Elephants’ Campaign and raise awareness of critically endangered species. Heathrow will unite airport partners and travellers under a common purpose – to create a global movement for change – using interactive games and displays.

The installation will feature a limited edition Angry Birds ‘united for elephants’ game, elephant masks for kids and virtual reality headsets taking travellers to visit elephants in the Serengeti to inspire them to learn about and help protect endangered species.

Representatives from Border Force and IAG Cargo will also be on hand to provide passengers with further information about elephants and illegal trade. Border Force’s CITES team will also display examples of elephant products seized at Heathrow.

Heathrow director of sustainability, Matt Gorman says: “As a leading international travel hub, Heathrow has a responsibility to take the best possible care of everyone and everything that passes through our gates.

“We are proud to be a key signatory of the United for Wildlife Buckingham Palace Declaration and are committed to working with our partners to create a world worth traveling, for future generations.”

As part of Heathrow’s plan for sustainable growth – Heathrow 2.0 – the airport says it is committed to take action to help curb illegal trade in endangered species, and protect the world’s precious wildlife.

This event is part of that commitment and will help Heathrow to meet its ambition to ensure no illegal wildlife, or illegal animal products pass through the airport.

IAG Cargo live animal product compliance manager, Gabriella Tamasi says: “The air cargo industry plays an important role in the protection of endangered species, we regularly transport animals protected under CITES and as a signatory to the Buckingham Palace Declaration for ‘United for Wildlife’ we are proud to be working closely with our partners to ensure that all animals are transported and treated in the safest and best possible way.”