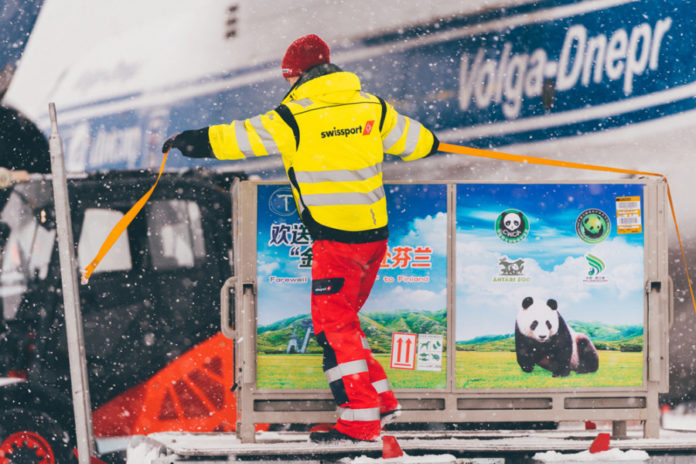 Pyry and Lumi the Chinese pandas have arrived in Helsinki on their way to their new home Ahtari Zoo where they will make their public debut on 17 February.

The pandas arrived at a snowy Helsinki-Vantaa Airport on 18 January on flight VDA3134 and were handled by Swissport Finland.

They were greeted by caretakers, vets, representatives of the Ahtari wildlife park and the government, and Swissport ground agents, where the ground service provider coordinated the movements of the boxes to the truck, and monitored all processes near the aircraft.

Dozens of Swissport employees were on site to ensure smooth handling for the new residents of Ahtari wildlife park.

Swissport Finland chief executive officer, Tomi Viitanen says: “The Swissport Finland team is proud to be a part of this happening. We were delighted to meet Pyry and Lumi and I am sure that thousands of visitors to Ähtäri wildlife park will enjoy the two Pandas as well.

“It was an honour to contribute to their smooth arrival despite the harsh weather conditions. This was only possible due to the great performance of our dedicated staff.”

Caretakers and vets travelled to China to spend a week with the pandas in their home country, which was important to familiarise the animals to their transportation boxes and to win their trust for the long trip from Dujiangyan Panda Centre to Helsinki via Chengdu Airport.

The male panda’s original Chinese name is Hua Bao and the female is called Jin Bao Bao, and these names will be used along side the Finnish ones, which were chosen by a public vote held by Finnish television company MTV.