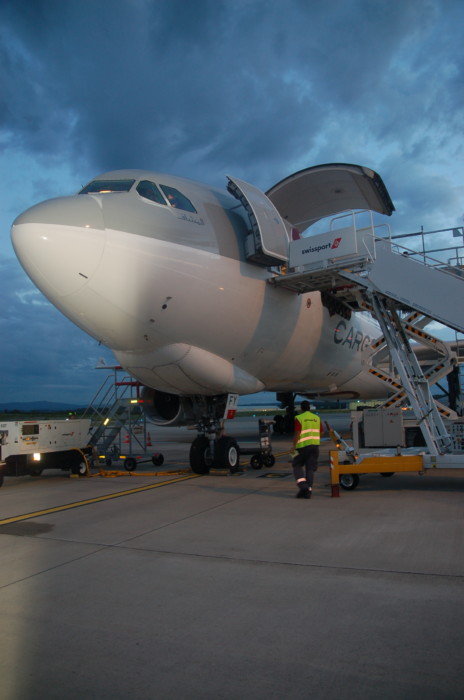 The award had been made in May but airport officials, Swisport managers, and representatives from pharma customers, Qatar Airways and cargo media were invited to an evening presentation this week to receive the certificate.

IATA global head of cargo Glyn Hughes presented the certificate to Swissport International COO Nils Pries Knudsen. The pair were positioned outside some of the newest cool chain equipment at the bi-national Basel EuroPort.

“We are very pleased to receive the recognition by the CEIV for pharmaceutical logistics services at our state-of-the-art cargo facility in Basel,” says Swissport International CCO Nils Knudsen. “The CEIV certification underlines the attractiveness of our services at Switzerland’s most modern air freight terminal.”

With annual growth rates of nearly ten per cent and a total turnover of some 47,000 tonnes in 2017, Basel is one of the most important cargo locations of Swissport.

Since the opening of the warehouse in 2015, Swissport has continuously expanded its on-site offering. The facility features 7,500 square metres of temperature-controlled surface, with a temperature range of +15 to +25 degrees Celsius. Additionally there are special cooling units for pharmaceuticals ensuring a temperature between +2 and +8 and a unit for goods which require a constant temperature of -20 degrees Celcius. Due to an exclusive direct access to the Tarmac, Swissport can move pharmaceuticals within an average of two minutes from its temperature-controlled warehouse to the aircraft.

After the official presentation, guests were invited to watch the landing and loading of a Qatar Airways A330 freighter. It was en route from London Stansted to Doha. The aircraft was scheduled to be at Basel for 90 minutes.

Perisbale and pharma products were loaded within two minutes while other cargo was moved through French customs posts to gain access to the aircraft.