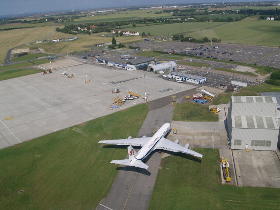 Manston Airport could be subject to a compulsory purchase order by its local government, Thanet District Council, if it decides it is a viable option with a partner company.

US property investment company RiverOak Investment tells Air Cargo Week (ACW) it wishes to, “obtain title,” to the airport, indicating its readiness to participate in a compulsory purchase. It has also expressed such interest in its proposal to the UK government’s Airport Commission – set up to recommend runway expansion in 2015.

Thanet council had asked for expressions of interest in participating in a compulsory purchase by possible partners by 20 August. The partners then had to justify their case in a questionaire, to be submitted by 1 September. Possible partners selected by the council could be asked to give face-to-face presentations this month. In July, the council received an independent report into the viability of Manston Airport.

In its Airport Commission proposal, RiverOak says Manston could make significant contributions to relieving pressure from the UK’s other major airports, including Heathrow Airport and Gatwick Airport. RiverOak says one carrier has offered to increase its flights by 30 per cent if Manston is re-opened. The US company says it would re-establish the airport’s cargo business that specialises in perishables. RiverOak aims to handle 250,000 tonnes of cargo a year by 2030. It says: “As commercial property developers and logistics operators, we understand the value of infrastructure such as airports. We believe that creating underlying value is a crucial part of the strategy for a regional airport like Manston.”

In its proposal to the Commission, RiverOak also states that the UK government’s Department of Transport forecasts that by 2020, £42 billion ($69.5 billion) of air cargo will be lost to London airports because of capacity constraints. In its proposal, RiverOak says Manston was handling 30,000 tonnes of cargo a year, making it the sixth busiest airport in the UK, handling more freight than airports including,London Luton Airport and Birmingham International Airport. RiverOak says Manston was popular with carriers and freight forwarders because of its reputation for efficient turnarounds.

The airport’s owner, Manston Skyport, closed it on 15 May. The company tells ACW it is, “for the council to decide whether to proceed,” with a compulsory purchase and declined to comment more widely.