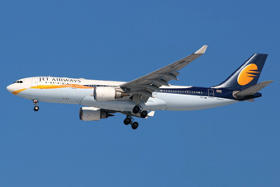 In the wake of the loss, the three-year business plan includes, a cost restructuring programme, changes to the network and fleet, and benchmarking by independent advisors. The new CEO is Cramer Ball, a certified accountant and an airline executive who has worked at senior levels in international, domestic and regional aviation, according to Jet.

“We need to take stringent measures to ensure our success in this challenging and competitive aviation industry. There can be no short-term solutions. The changes required will take time to implement,” says Jet’s chairman, Naresh Goyal. Following an cost benchmarking study by independent advisors, Jet Airways has established a taskforce to implement a major restructuring of the business. The fleet changes are to include, the standardisation and reconfiguration of the Boeing 737 fleet and changes to the airline’s Boeing 777 and Airbus A330 fleets.

Airline advisors, Seabury has completed a long-term network and fleet plan which will be implemented for Jet’s domestic and international operations. Etihad Airways has taken an 24 per cent equity stake in Jet, worth $750 million. Etihad’s president and chief executive officer, James Hogan, and its chief financial officer, James Rigney, attended the board meeting for the first time. Hogan says: “We are a long-term strategic investor and committed to supporting Jet Airways as it re-engineers its business to achieve sustainable profitability.”