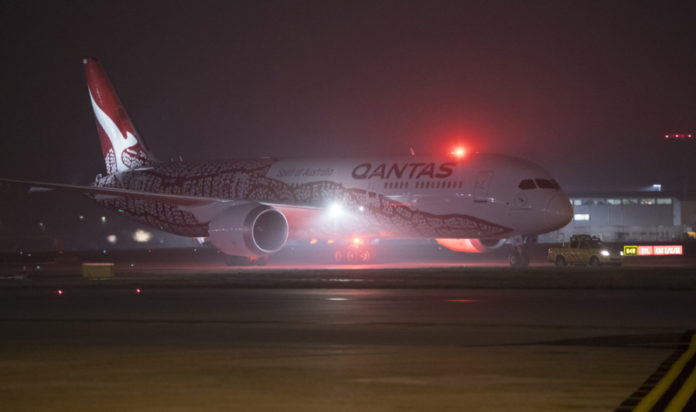 Qantas’ direct services between Perth and London could open up opportunities for freight customers, particularly for e-commerce, the airline says.

The historic flight, number QF9 carried more than 200 passengers and 16 crew, with the Boeing 787-9 leaving Perth, Western Australia just before 7pm on Saturday evening and landing in London at 5am on Sunday morning.

Qantas chief executive officer, Alan Joyce says: “This is a truly historic flight that opens up a new era of travel. For the first time, Australia and Europe have a direct air link. The original Kangaroo Route from Australia to London was named for the seven stops it made over four days back in 1947. Now we can do it in a single leap.”

The UK minister of state for trade and export promotion, Baroness Fairhead adds: “This historic, new direct flight opens the door to further opportunities for British and Australian businesses and will make life easier for tourists travelling between London and Perth.”

Qantas Freight is hoping to benefit from the Kangaroo Route being able to jump between Australia and the UK without stopovers, as packages and items bound for Europe will arrive quicker, which will be a benefit for e-commerce customers and pets, who will spend less time travelling.

The daily QF9 service begins in Melbourne before flying to Perth and then London, with Qantas adjusting the timing of some domestic services into Perth so customers from Adelaide, Sydney and Brisbane can join the flight to London.

The aircraft named Emily operated the inaugural service, featuring a striking livery by Balarinji based on the artwork by Yam Dreaming by Indigenous artist Emily Kame Kngwarreye.

Qantas has experimented with direct services in the past, operating a Boeing 747-400 from London to Sydney non-stop in 1989, covering 18,000 kilometres in 20 hours nine minutes and five seconds – but it had fewer than 30 people on board to reduce weight and required special air traffic control priority to make the distance.