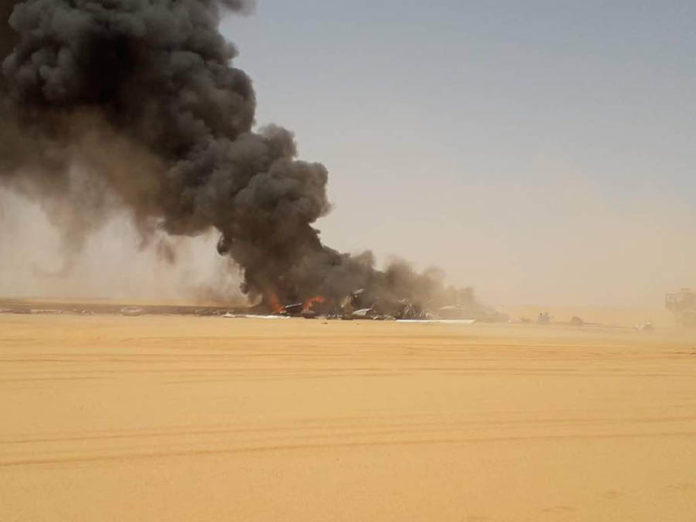 Three crew members, including the pilot, were killed and another wounded when a cargo plane exploded minutes after taking off from Sharara oil field in southwestern Libya on Sunday. The C-130 aircraft was delivering 18 tonnes of catering and maintenance supplies to Sharara oil field.

In a statement, the National Oil Corporation (NOC) of Libya confirmed the crash occurred at 12:25pm on Sunday, April 29, 2018.

Fire-fighters and paramedics quickly rushed to the scene. The incident resulted in the death of three crewmembers and the injury of one other who is being evacuated by air to receive medical treatment in Tripoli.

The NOC Board of Directors met with local management and a number of emergency staff to follow up on the incident. The circumstances of the crash are still being investigated.
Libya Presidential Council chairman Fayez Al-Sarraj was briefed on the developments of the incident, and expressed his solidarity with the families of the victims, ordering the preparation of a decree commemorating the deceased as martyrs.

The General Civil Aviation Authority (GCAA) was also briefed and offered its condolences to the Chief of Staff of the Air Force.

The plane in question is the property of the Libyan Air Force but was chartered by Akakus Oil, who operate the Sharara field. The company was forced to charter the aircraft due to road closures and the security situation on the ground stemming from a road blockade leading to the field.

National Oil Corporation chairman Eng. Mustafa Sanalla expressed his deepest sorrow and solidarity with the families of the victims and to the Air Force Chief of Staff, offering sincere condolences on behalf of NOC following this great tragedy.