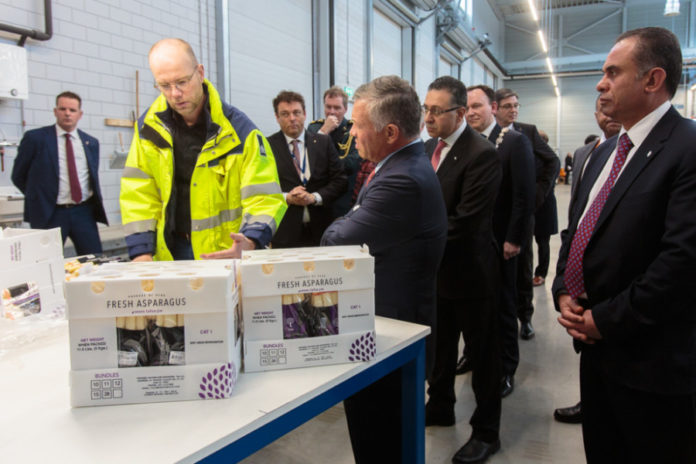 The king of Jordan has paid a visit to Amsterdam Airport Schiphol, viewing the Joint Inspection Centre (JIC) and learning how freight can be handled in a safer, more efficient manner.

His Majesty King Abdullah II and a delegation of Jordanian officials including minister of industry and trade, Yarub Al Qudah; and the kingdom’s ambassador to the Netherlands, Ahmed Al Mufleh visited the airside of Schiphol and were shown an example of the inspection journey that a package arriving at Schiphol SmartGate Cargo undertakes during the import process at the JIC.

The samples went through JIC’s ULD control scanner and a further manual inspection was carried out by personnel of the Customs Authority to identify other potential risks.

The JIC is designed to make freight handling safer and more efficient by allowing different law enforcement and inspection authorities to carry out checks in close cooperation with business partners.

De Vos says: “The event had the aim to assess the import processes of perishables and their effectiveness as part of a public-private cooperation; essentially, how these processes can have a positive impact on the speed of handling cargo by private entities without compromising security.”

The second part of the visit focused on the public-private cooperation model used for the logistics of perishables, and the tour was under guidance of Panalpina with checks performed by the Netherlands Food and Consumer Product Safety Authority.

Panalpina relocated some perishables that were in transit to the JIC to highlight the cooperation model and demonstrate that less control by public authorities does not compromise security and can foster efficiency.

Van de Vosse says: “Very stringent requirements need to be fulfilled to be part of these processes. We are proud to work together with our partners at Schiphol and the authorities to ensure every step of the way is handled in the safest and most efficient way.

“This is something we aim to do throughout our global Perishables Network.”