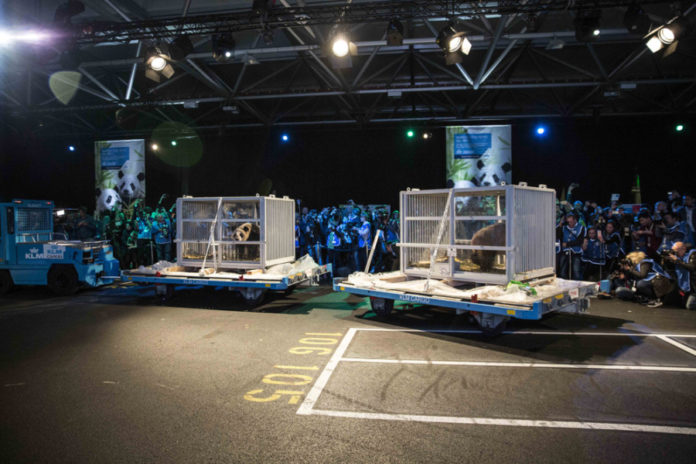 KLM has transported Xing Ya and Wen Wu the giant pandas from Chengdu to Amsterdam on their way to Ouwehands Zoo.

The pandas flew on a KLM Boeing 747 combi (KL0892) boasting the names of both pandas, taxied to the gate, escorted by the panda truck and KLM Panda Bus before transferring to the KLM Animal Hotel where they were shown to specially invited guests and members of the press.

KLM Cargo executive vice president, Marcel de Nooijer says: “KLM Cargo is honoured to have been able to transport the giant pandas from Chengdu to their new home at Ouwehands Zoo. It is a special moment for the Netherlands to welcome the pandas after so many years.”

“As a Dutch cargo carrier, KLM Cargo has an excellent reputation to maintain in the field of animal transport and this task serves as a great compliment to the knowledge and expertise possessed by our staff.”

Jan de Rijk Logistics transported Xing Ya and Wen Wu from Amsterdam Airport Schiphol to Ouwehands Zoo in Rhenen on board a truck with a special livery marking the occasion.

The animals will go into quarantine for 30 days upon arrival in Rhenen, before the grand opening of their specifically built says called ‘Pandasia’.