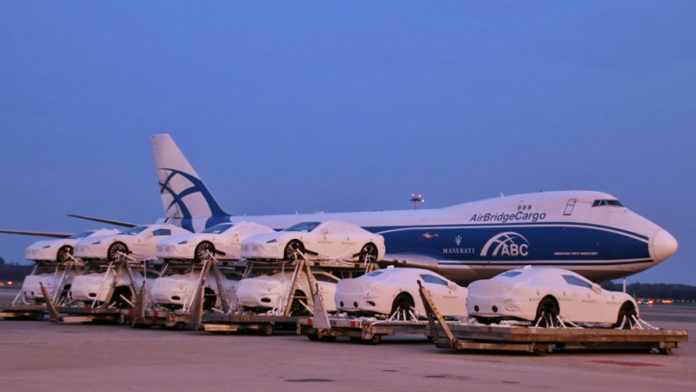 Think Italy and you might think fashion and fast cars – and Milan. What you might not think, is a Russian-owned airline and one with links to Luxembourg, that are transporting Italian goods around the world, writes Stuart Flitton.

The Russian all-freight airline AirBridgeCargo (ABC), with a key base in Vignate, began operations from Milan’s Malpensa airport in 2009 but last year transported more than 60,000 tonnes of cargo, a 14 per cent increase over 2016.

In the first five months of this year, there was a 12 per cent rise, compared with the same period last year.

Around 70 per cent of exports are to China, made up of fashion, cars and parts and industrial equipment. The decision to launch operations in June 2009, with two flights weekly, coincided with a shortage of maindeck capacity in Italian cargo.

ABC vice-president, Europe, Andrey Andreev says: “Our launch of services was very welcomed by customers from fashion and apparel with the focus on our long-term partnership with customers in this region.

“Gradually we’ve been increasing our presence in Italy and currently, we operate eight flights a week from Milan, being among the top five cargo carriers from Italy.”

The decision to fly out of Malpensa was also driven by the fact that the airport has a dedicated cargo terminal, easy access to road and rail connections.

It is the busiest cargo airport in Italy and one of the few in Europe offering 24/7 services. This allows extra capacity to be provided on demand, which occurred in May this year when ABC added five additional flights to accommodate demand.

Volumes at Malpensa have grown by more than seven per cent a year last year and 2016, with even bigger growths in the previous two years, topping nine per cent in 2014.

Another foreign-based cargo specialist at Malpensa is Cargolux Italia, which started operations in 2008 with one Boeing 747-400F only offering connections to Hong Kong. The offshoot of the Luxembourg all-cargo operator, Cargolux, is based at the Milan airport.

The airline added three additional 747-400 freighters, dry leased from the mother company in 2014-15, and also has the option of using up to two aircraft in ACMI wet lease from the main Cargolux fleet.

The dedicated freighter aircraft operated by the company are designed to hold up to 113 tons of goods within a range of approximately 8,240 kilometres. The freighters have side and nose cargo doors, which allows the company to cater for a wide range of shipments.

He adds: “Thanks to the easy side and front access that the B747-400F offers, Cargolux Italia is able to take on oversized loads such as helicopters, engines, parts of ships and anything else that can be identified under this category.

“The Italian market has always represented a priority market for Cargolux, so much so that today it is the second European market after Germany.”

Cargolux Italia accounted for 14.5 per cent of the national market share in 2016. Following in the footsteps of its counterpart in Luxembourg, the airline experienced a bumper 2017, flying 24,832 block hours, a 29 per cent increase over 2016 and boosted its load factor by 3.2 per cent.

The airline continues to consolidate its operations towards Asia with plans for three weekly flights to Hong Kong with a stopover in Osaka, one weekly flight to Dubai, which will also continue on to Hong Kong, as well as two rotations to Zhengzhou in mainland China.

One of the leading Italian logistics providers is BCube, which was founded by the Bonzano family in 1952. Operating in some 100 European, American and Asian locations, it manages more than three million square metres of space.

One of the world’s biggest manufacturers of security metal detectors, including cargo scanners, is CEIA, based in Azurro, Tuscany.

The CEIA Electro-Magnetic Inspection Scanner (EMIS) is used on non-metallic cargo to detect detonators and electronic circuits from improvised explosive devices, ammunition and weapons such as knives and firearms.

It can inspect goods such as fruits and vegetables, flowers and herbs and organic, breads and cakes and beverage in non-metallic containers. The largest EMIS scanners can be used to inspect entire pallets of non-metallic cargo.