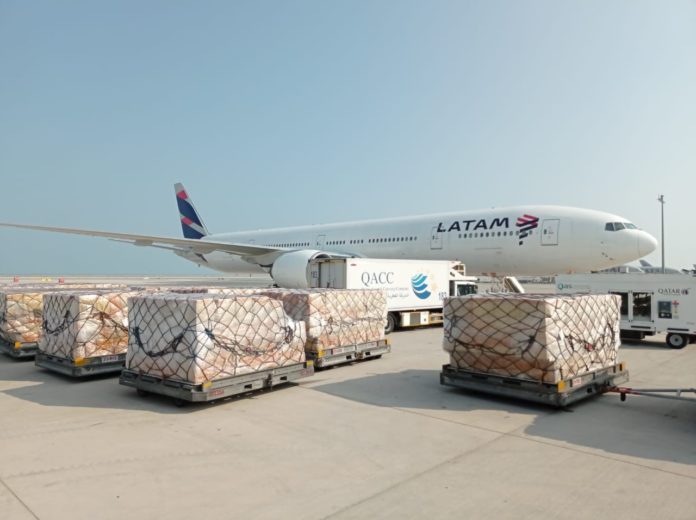 The 30th November marked a special day for LATAM Cargo as an aircraft from the Group operated by LATAM Airlines Brazil landed in Doha, Qatar, transporting perishables from LATAM Cargo customers in South America to Asia and returning to Latin America with a load of electronics.

“Landing in Qatar for the first time is the clearest demonstration of our commitment to satisfy the needs of our cargo customers. With the help of our subsidiaries, we managed to successfully coordinate and implement a route permitting to reduce transport time to relevant markets while supporting export and import markets in South America,” commented Kamal Hadad, VP Network and Alliances of LATAM Cargo.

The second flight departed on December 07 towards Doha. In total, with these operations LATAM carried over 95 tons of fresh fruit, which connected with our interline partner Qatar Airways to continue their journey to Shanghai. They also facilitated the importation of more than 60 tons of electronics into the Brazilian and Chilean markets, just in time to meet the Christmas season demand.

LATAM Cargo maintained its strategy of using passenger aircraft as all-cargo transport during the pandemic, which proved very helpful to mitigate the belly capacity reduction caused by the global border closure. In particular, on this route a B777-300 took off from Guarulhos airport in Brazil en route to Santiago, Chile, with a technical stop in Recife, Brazil, before continuing its journey to Doha, Qatar. The return flight ended in Guarulhos.

More than 50 people from different departments formed the team responsible for the implementation and logistics of this operation, which totalled 18 hours of flight from its origin in Brazil until its final destination in Doha.

Hadid added: “We are aware this route is temporary and responsive to the high fruit season in Chile and the greater demand for electronics during Christmas time, but we will continue to adapt our operation to better serve our customers and carry South American products to the world,”