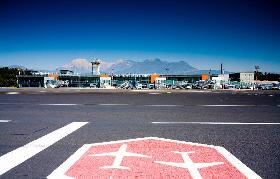 Fraport will pay 177.1 million euros ($229.3 million) to acquire a 75.5 per cent stake in Ljubljana Joze Pucnik Airport, with the intention of a full takeover bid at a later date.

It reached the agreement with the airport’s operator, Aerodrom Ljubljana, after the bidding process ended on 4 July. It says the purchase will be financed by liquid funds and it will submit a takeover bid to the remaining shareholders. Fraport’s executive board member for controlling and finance, Dr Matthias Zieschang, says: “Our extensive know-how gained over many decades will enable us to further expand and strengthen Ljubljana’s competitive position.”

Ljubljana is working on its development strategy which is designed to cope with increasing cargo volumes to 18,800 tonnes of cargo a year. This will involve spending 114 million euros upgrading buildings and equipment by 2017. It will also involve rerouting 2,400 metres of the Kranj-Menges main road further north to provide space for airport expansion. As part of its master plan, it will open the first phase of its new cargo centre in early 2015, and is expecting tenants like DHL or UPS to move in.

Year-to-date (YTD) Frankfurt has handled 1.4 million tonnes, up 2.4 per cent on the same period in 2013. Fraport’s Hanover-Langenhagen Airport has seen cargo volumes decline by 2.4 per cent to 9,391 tonnes.

Other airports in the group have seen rises; Burgas Airport and Varna Airport have seen increases of 100 per cent, to 3,302 tonnes and 45 tonnes, respectively. Fraport declined to explain why they had 100 per cent increases. Xi’an Xianyang International Airportsaw a YTD rise of 5.6 per cent to 115,765 tonnes. This airport also had the best monthly rise with 12.3 per cent.