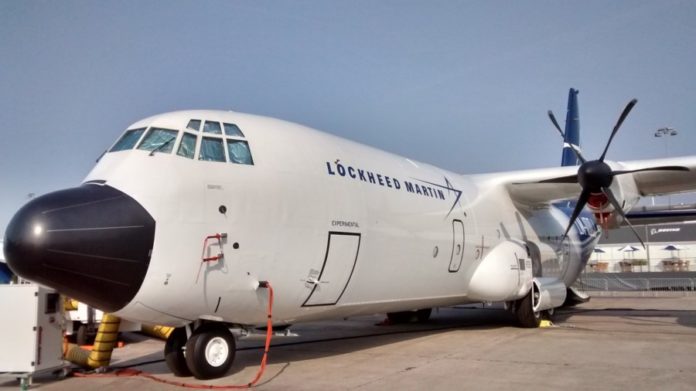 Lockheed Martin has secured an order for five of its civilian LM-100J freighters from an undisclosed customer bringing its total order book to 25, writes Rob Coppinger at the Paris Air Show.

The LM-100J is an updated version of the Lockheed’s L-100 Hercules and incorporates technologies developed from the military version of the aircraft, the C-130J Super Hercules.

The undisclosed customer is also the launch customer, the other 20 aircraft on order are from letters of intent. If all the orders are confirmed, the sales are worth up to $1.6 billion.

The 2018 LM-100J delivery date is dependent on the US government’s Federal Aviation Administration (FAA) certifying the aircraft for civilian use. The LM-100J is only being certified for cargo, and not for carrying passengers. 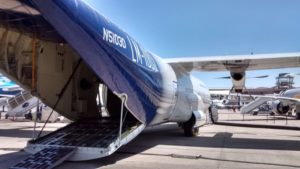 To date, the LM-100J has flown more than 50 hours of flight test as part of that certification process. At the beginning of this year, Lockheed rolled out the first LM-100J from its Georgia factory and that is the flight test aircraft.

This first LM-100J had its maiden flight on 25 May. Lockheed expects to have test flights finished this year and then FAA certification, which is for a supplemental type certificate (STC) for a design update, would be awarded shortly after.

The certification is a design update for the Lockheed Martin Model L-382J, a variant of the C-130J Super Hercules.

The LM-100J design update includes new avionics, other sub-systems and new Rolls Royce engines. The fuselage, however, is the same as the standard cargo C-130J version. The LM-100J is the stretched fuselage which provides a 16.7-metre long cargo floor.

The LM-100J’s predecessor, the L-100, sold 115 aircraft worldwide and about 50 per cent of those went to governments. 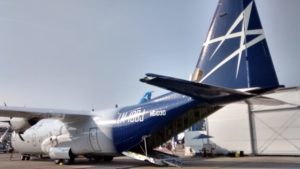 One existing L-100 customer would like the LM-100J certified for a particular special ability. Lockheed Martin’s chief test pilot for the LM-100J Programme, Wayne Roberts told ACW:  “One of our customers…… wants us to certify this airplane to an eight-degree runway slope. There are only a few in the world. This customer has been operating their old L-100s.”

Roberts explained the LM-100J engines would be able to operate in temperatures up to 102 degrees Fahrenheit at sea-level. The LM-100J is able to carry 33 per cent more cargo than the L-100, which was last marketed in the 1990s.

With 1.7 million flight hours achieved by C-130Js, Lockheed is confident they know how its sister aircraft, the LM-100J, will perform.

The Hercules family of aircraft including the LM-100J can operate from unprepared runways, dirt tracks and frozen tundra if need be.

Of the 25 orders, 20 are not firm and are letters of intent (LOI) from Dublin-based ASL Aviation Group and Brazilian logistics firm Bravo, with 10 aircraft each.

ASL will base its LM-100Js at Shannon Airport in Ireland. Today, ASL leases seven L-100s aircraft to its associate company Safair, based in Johannesburg, which provides flights for the United Nations and transport humanitarian aid across Africa.

Bravo penned the LOI in July 2016, at the Farnborough Air Show and its Logística division will operate the LM-100J for air cargo operations.

Lockheed Martin LM-100J business development director, Tom Wetherall told ACW: “We see the market at between 75-125 aircraft and the reason for that is the regions of the world that need high value lift off the ground, and when I say ground I mean dirt gravel mud etc, and the LM-100J can land and take-off from about 70 per cent of the land mass of the planet.”

He added for United Nations cargo humanitarian relief operations, one of the rules is, a civil certified aircraft must be used. But, governments will also use it for more mundane purposes. “We have nations who haul polo ponies and cars,” said Wetherall.

Wetherall also sees e-commerce as a role for the LM-100J. “The demand for e-commerce is growing exponentially, far greater than roads and infrastructure can keep up with, so we see companies expanding into those regions of the world [buying the LM-100J], as this is a way of getting those products to those markets.”